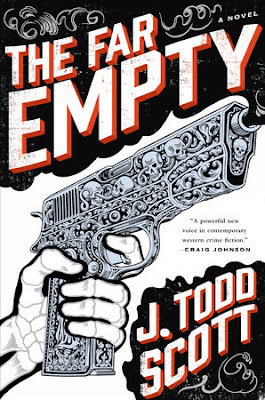 
“The Far Empty is a work of fiction, more or less.”

Fictional Murfee, Texas, is the seat of fictional Big Bend County (“where there’s more blood in the ground than water”), situated on the very real border with Mexico, where desperation and ambition meet avarice, hubris, and drug-fueled insanity. Seventeen-year-old Caleb Ross desperately wants to escape no-account little Murfee, not least because he believes his father is responsible for his mother’s disappearance. Quiet and perceptive, Caleb feels guilty and cowardly because he hasn’t confronted his father, and he’s wound tight from living with a human rattlesnake.

Caleb’s father is Sheriff Stanford “Judge” Ross, a hard, arrogant, murderous man who rules Big Bend County like a feudal estate. People in his orbit have a habit of disappearing and/or dying. Rookie deputy Chris Cherry is a former high school football star, reluctantly returned to Murfee after a devastating knee injury. When Chris discovers a body on a remote ranch, he and Caleb eventually join forces, and as the Sheriff’s secrets emerge, the whole Walking Tall scenario in Big Bend County begins to disintegrate.