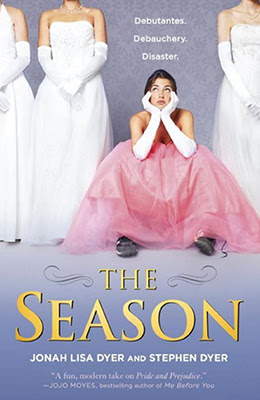 I reviewed The Season (Viking) by Jonah Lisa Dyer and Stephen Dyer for Lone Star Literary Life! Imagine the result if Jane Austen were writing in Dallas in 2016. This is my pick, so far, as the best beach read of this summer. The Season is exactly what you expect it to be - and so much more. From the review:


Spunky Megan McKnight is a twenty-year-old soccer player at Southern Methodist University with dreams of making the Olympic team. The Bluebonnet Club Debutante Season is the very last thing on her mind. Then a story (“an announcement for a virgin auction”) appears in the local paper declaring that Megan and her twin sister Julia are debuting this season, complete with photographs (Megan thinks she looks “like a hick who’d lucked into a makeover coupon”), and Megan realizes that her mother has pulled a fast one. When Megan confronts her mother (“Clearly decades of coloring your hair and chugging SlimFast have taken a toll”), she learns that there is more to her mother’s madness than she knows and she agrees to debut as a favor to her father.

The Season, the first novel from screenwriters Jonah Lisa Dyer and Stephen Dyer, is a romantic comedy, a modern YA riff on Jane Austen that is my pick, so far, for best beach read this summer. In fact, I didn’t want to put it down and read it in one sitting. The Season is fun, easy reading but it’s not all sweetness and light. The plot is carefully crafted and weaves together several well-developed subplots, including violence against women, financial disaster, and environmental catastrophe.

Megan’s first-person narrative is breezy and irreverent. When she rips her dress riding a bicycle to debutante orientation, she uses the receptionist’s stapler to close the gap. She frets that her cleavage has been “stunted” by years of sports bras. Megan attends the first party sporting a black eye, courtesy of an opposing goalie, and there meets Hank and Andrew. Is Hank as good as he seems? Is Andrew the total jerk he appears to be?