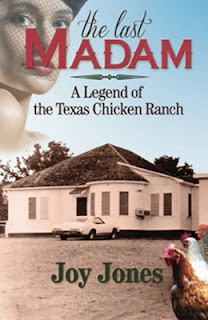 I reviewed The Last Madam: A Legend of the Texas Chicken Ranch (Treaty Oak Publishers) by Joy Jones for Lone Star Literary Life. This is a historical novel imagining the life of Edna Arretha Milton, the last madam at that shack outside La Grange. It's a mixed review; Jones had me at the beginning but ran out of steam before the end. From the review:


Edna Arretha Milton is barely sixteen, with no education, when she arrives at her brother’s house in California, having just escaped Oklahoma and her itinerant, hardscrabble life as the daughter of sharecroppers, only to find that her brother has promised her as a bride to one of his fellow oilfield workers. With no say in the matter (“How could this man be in charge of me so completely?”), Edna is handed over like excess baggage, but she tries to make the best of things with her new husband. When she lands in the hospital after a particularly brutal beating, the police step in and Edna secures a divorce and, eventually, a job in a restaurant kitchen. After a love affair that ends when the pilot is killed in the Pacific Theater of World War II, Edna decides she’s going to take control, and never depend on a man for her very life ever again.

She washes up in “the Free State of Galveston,” where gambling, liquor, and prostitution are openly tolerated. The Balinese Room and the Turf Club are hopping, and the Maceo crime family holds court. Edna eventually makes her way to the Chicken Ranch in Fayette County, Texas, buys the place, and becomes the madam before the Chicken Ranch is finally shut down for good in 1973.

The Last Madam: A Legend of the Texas Chicken Ranch is Joy Jones’s historical novel of the life and times of Edna Arretha Milton, the eponymous last proprietress of the nationally renowned Chicken Ranch outside La Grange. This isn’t Pretty Woman nor is it The Best Little Whorehouse in Texas. The Last Madam is an entertaining but serious treatment of material too often sentimentally romanticized.

Told in first person, Edna’s narrative is immediately engaging. Edna’s goals are a place to call home and control over her own life. She wants to be a businesswoman. With no education and only unappealing options, she chooses the one that she believes offers her the most independence and a reasonably comfortable living. As Edna says, “It’s a sorry way to what you want to be.”