Review: THE DEAD WILL RISE AND SAVE US: STORIES BY PAUL PEDROZA 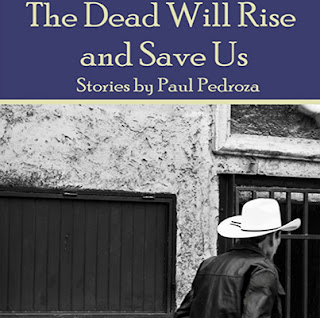 I reviewed The Dead Will Rise and Save Us: Stories by Paul Pedroza (Veliz Books) for Lone Star Literary Life. This is Pedroza's versatile and compelling debut collection. From the review:

Themes of boundaries, loneliness, identity, opportunity, and responsibility permeate this collection of contemporary short fiction set in and around El Paso, Texas. Paul Pedroza possesses a versatile voice, able to create a diverse cast of compelling narratives: young and old, male and female, Anglo, Mexican, and Mexican-American, immigrants and residents, and a variety of socioeconomic classes, even the dead—the encobijados, dead bodies wrapped in blankets and dumped by narcotraficantes. Pedroza is also equally at home with a variety of styles, from slice-of-life to the fantastical.

The Dead Will Rise and Save Us: Stories by Paul Pedroza is Pedroza’s debut collection, although a handful of these stories have appeared previously in publications such as New Border Voices (Texas A&M University Press, 2014) and MAKE: A Chicago Magazine, Issue 12 (Winter 2012).

“Subtle Shades of Green,” the first story, is a standout. Robert, whose mother is Anglo and father was Mexican, attends Bowie High School in El Paso, lives in the barrio, and gets into trouble, inadvertently worsening the situation, when he tries to stand up for his darker-skinned friends who are hassled by the Border Patrol during a pickup basketball game. When his friends subsequently abandon him, Robert feels the “constituent parts inside [him] beginning to pull away from one another, creating boundaries not unlike the one marked by fence and river.”