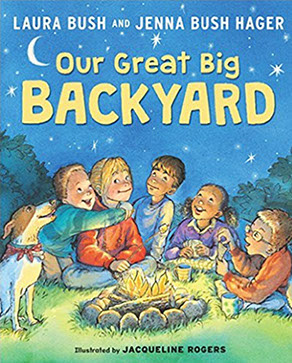 My review of Our Great Big Backyard (HarperCollins) by Laura Bush and Jenna Bush Hager was published in Lone Star Literary Life! This is a sweet picture book for ages 4-8, timed to coincide with the centennial celebration of the United States National Park Service. From the review:


Jane and her friends have their electronic summer all planned out—movies, YouTube, and video games—until Jane’s parents ruin everything with their dorky Great American Road Trip. Disappointed, frustrated, Jane says goodbye to her friends on the last day of school. As the trip begins, Jane’s nose is in her iPad. She fails to appreciate the manatees at Everglades National Park and the Mark Twain lookalike riverboat captain on the Mississippi.

The next stop, however, is Big Bend National Park, where Jane is impressed by the Texas night sky. A “meteor shower lit up the sky like fireworks,” Jane says, “brighter than any screen I had ever seen.” Jane and her family go on to play astronauts in the desert, tightrope walkers at Grand Canyon National Park, and cowboys at Yosemite National Park, where El Capitan makes Jane feel “really small but really great, too, like I was part of something big.”