Review: THE GROUND ON WHICH I STAND: TAMINA, A FREEDMEN'S TOWN 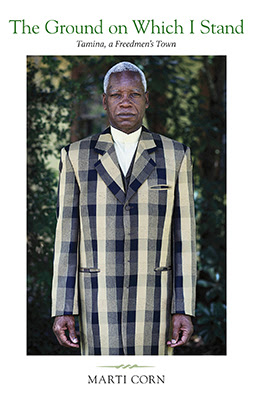 In honor of Juneteenth, I reviewed The Ground On Which I Stand: Tamina, A Freedmen's Town (Texas A&M University Press) by Marti Corn for Lone Star Literary Life. This is a beautiful book of photographs and essays celebrating the tradition of Texas's freedmen's towns established by former slaves in the wake of Emancipation. From the review:

An unincorporated community in Montgomery County, Texas, north of Houston and ten miles south of Conroe, Tamina began as a settlement for freed slaves (a “freedom colony”) in 1871. Some of the settlers came from adjacent Texas counties; others came from as far away as Virginia and Maryland, through the Port of Galveston, previously the United States’ busiest slave port (“from the Congo to Conroe”).

The Ground on Which I Stand: Tamina, a Freedmen’s Town, a handsome book with an arresting cover portrait of Johnny Jones, railroad worker, musician, and resident of Tamina (whose challenging gaze is now part of the permanent collection at the Museum of Fine Arts, Houston), is volume twenty-two of Texas A&M University Press’s Sam Rayburn Series on Rural Life. This is documentary photographer Marti Corn’scontribution to this venerable series, which seeks to explore the history and culture of individuals and communities throughout rural areas of eastern Texas.

Corn mixes her current photographs and portraits with historical images, conveying the passage of time, for good and ill, in Tamina. Her portraits (“The Faces of Tamina”) are often striking with character, the personalities leaping off the pages. Some of the dwellings, like the people, are trim and spry while others have fallen into disrepair. The surrounding woods have initiated a reclamation project and some buildings, as well as vehicles (and one cemetery), are in the process of disappearing.

The accompanying essays are first-person accounts by the residents themselves, many of whom are descendants of the original settlers. These essays read like a collection of linked short stories that, while engaging individually, come together to create a more-complete, complex picture of Tamina. The whole is greater than the sum of its parts. The residents are teachers, preachers, and tree-cutters, grandmothers and children. The unifying theme throughout these accounts is a sense of bonding with each other, with the land, and with history—an appreciation of what it meant to their forebears to have a place of their own and to live more on their own terms.