Review: THE CITY OF MIRRORS by Justin Cronin 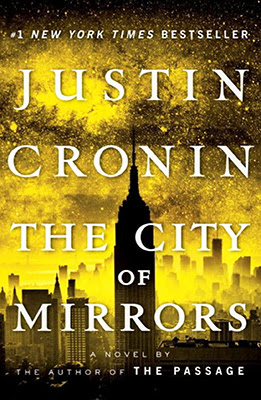 My review of The City of Mirrors (Ballantine Books) by Justin Cronin was published by Lone Star Literary Life! This is the final installment in Cronin's The Passage Trilogy and it is worth the nearly four years we had to wait. From the review:

SPOILER ALERT: The City of Mirrors is the final installment of a trilogy; if you haven’t read the first two books in the series then proceed at your own risk.


“…a beginning and an ending joined.”

It is eight months after the liberation of the Homeland: Amy, the Girl from Nowhere, is presumed dead; Alicia has gone missing to parts, and for reasons, unknown; Michael is a recluse in his boat on the Gulf of Mexico; and Peter has gone to Kerrville, Texas, with Caleb. Billions are dead; global civilization is destroyed. No one has spotted an Easter Virus–spawned viral for three years—the war is over.

The City of Mirrors is the final installment in Justin Cronin’s The Passage Trilogy. Fans have waited for more than three years to discover the fate of these beloved characters, and Cronin does not disappoint. Apocalypse threatens a dystopia sparsely populated by prophets and false prophets, seers and lunatics, sages and fools; and the messiah is called upon once again to save the survivors.

Cronin’s story is biblical, mythical, legend; heavily messianic, full of portents and resurrections, both bodily and societal. The plot is intricate, the vision full. The pace is steady until approximately halfway through and then picks up, tension building as the players take their places for the final showdown. The narrative moves back and forth through time and space, employing parallel realities and multiple points of view, shifting from third person to first and back. It is a challenge and too long, but the conclusion is thrilling.