Review: THE AFTER PARTY by Anton DiSclafani 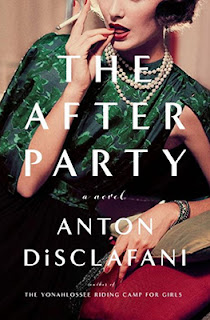 My review of The After Party (Riverhead Books) by Anton DiSclafani was published by Lone Star Literary Life! This is a mixed review of historical fiction about socialites in River Oaks (Houston, Texas) in the 1950s. From the review:


Joan “the jewel” Fortier, “Houston’s most famous socialite,” is twenty-five years old in 1957. She’s always chafed against restrictions imposed by her inherited position in society, but her behavior is increasingly erratic. Cece Buchanan, Joan’s best friend since before they can remember, believes it her “job to protect her [Joan] from herself,” to persuade Joan to behave, to “fall-in.” But Joan will not be tamed: keeping secrets, keeping company with strange men, disappearing from her family and friends; when she’s present, her state is clearly chemically altered.

Cece is hurt by Joan’s withdrawal and obsessed with whatever Joan is up to. When this fixation begins to threaten Cece’s marriage, she must choose. Cece, who observes that “most unhappy people … wanted contradictory things,” is torn between the comfortable, known world of her husband and son, and “the great big world of the night” that Joan represents.

The After Party, Anton DiSclafani’s second novel, set in the Houston neighborhood of River Oaks (where the houses have names and there’s enough alcohol to fill the swimming pools), follows the fateful events of a single summer in the lives of a clique of debutantes and illustrates the consequences of violating the stultifying conventions of a rigid society. Making liberal use of flashbacks, the story is told in first person by Cece (the “yawn”), revealing the history of a friendship. Cece has been spared obscurity amid the brighter lights of these debutantes by her association with Joan, the sun to Cece’s moon.