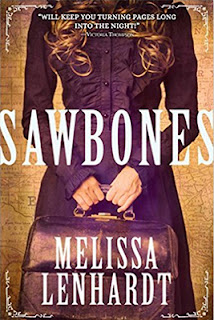 I reviewed Sawbones (A Laura Elliston Novel) (Redhook Books) by Melissa Lenhardt for Lone Star Literary Life! I thoroughly enjoyed this original historical fiction/thriller. It is possibly a new sub-genre: the feminist Western. From the review:

Catherine Bennett is the rare female surgeon in New York City, or anywhere, in 1871. Accused of a murder she did not commit and unable to offer an alibi that would not destroy her career and reputation, she is forced to flee. Landing in Galveston with a bounty on her head, Catherine Bennett becomes Dr. Laura Elliston and sets out to get lost. Elliston embarks on the Western Trail across Comancheria in a wagon train with a small party, recruited by one of the ubiquitous land men, to found a new town in Colorado.

Sawbones is Melissa Lenhardt’s second novel—and the first in a new series—of Western historical fiction, with elements of the mysterious thriller, and she’s hit the bull’s-eye with her first shot in this genre. Lenhardt grabs her audience in the opening scene, when Bennett practices new surgical techniques on a corpse she has paid a “resurrection man” to procure, and doesn’t let up until the final scene when Elliston rides off into the dark night with her new knight, on the run again.


Click here to read the entire review. Thank you!