A Follow-Up to Dogs With Bagels 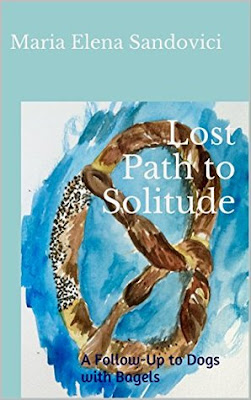 Once you leave home, can you ever return? Two characters, mother and daughter, contemplate this question in Lost Path to Solitude. Twenty-five years after leaving Romania in order to follow the man she loves to New York, Maria Pop still struggles with accepting her decision. She is determined to go back and recapture the poetry and joy of life in Bucharest, even at the expense of risking her marriage. Meanwhile, her daughter, Liliana, second-guesses her own choice of moving to a small town in Southeast Texas, ironically called Solitude, where she finds herself lonely, bored, and nostalgic for the fast pace of life in New York City. Facing the claustrophobic social climate of a town that goes to bed early, as well as the constrictions of her emerging academic career, Liliana longs for something that would give her existence meaning. The parallel soul-searching and the frustration they experience does little to bring mother and daughter closer. Instead, as each struggles with finding her own place in the world, they become increasingly critical of each other. Will their relationship survive the growing pains they each must suffer in their quest for self-fulfillment?

"But it is Liliana’s life in Solitude that most mirrors my reality. Her career struggles, her loneliness, her desperate wanderlust that moves her to get in her car & drive with no direction or goal (ironically landing in the same places that I often do). She just wants to flee, she lives for the leaving & Elena has once again found the right words, the right emotions & the right story line to express what is often so taboo in small town Texas. What do you mean there is a life outside of Solitude? Yes, there is, & it’s a life that is so well cherished & celebrated in this novel that I will, just like with the first one, return to it again, to experience anew, this journey, with these characters, that I have so grown to love & adore."
This review comes from the reader who prompted me to write Lost Path to Solitude, the reader I dedicated the book to. Have I mentioned she's also my friend, and a person I've known and admired for a decade? As if her asking me to write the book wasn't enough to make me anxiously await her review, there's more... 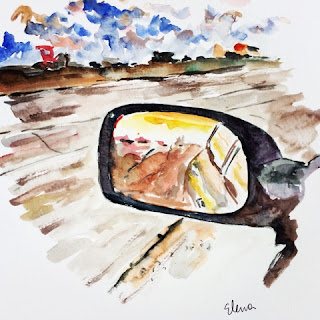 When you write fiction it is personal and it is not. You're not your characters and neither are your readers, yet their emotions, and the imaginary places they inhabit, both emotionally and geographically, must touch a chord, resonate with something that is real and honest, relatable, and raw. In my new novel, Liliana, young, vivacious, single, and full of imagination, finds herself lonely in a small town in Southeast Texas, a town ironically named Solitude. Living for the leaving, as my reader brilliantly puts it, she earns for an escape. Sound familiar? I was a little scared to write this, as if tapping into the loneliness that such a setting can bring to a young woman like Liliana, was a betrayal of sorts. And yet, the solitude and romance of small towns in this part of the world was something that I felt compelled to write about. I wondered if Liliana and I, through some irremediable failing of our upbringing in the city that never sleeps, were wired to  fail at life skills essential to battling loneliness in a place that closes down early. Fact is, if you are bored and lonely, even in Solitude, Texas, many will tell you it's your own fault. But. Maybe we're not alone, Liliana and I. Maybe there are other young women with too much flair and imagination to want to either marry young or go to bed early, who would rather drive around aimlessly, check into beach-side hotels, write poetry or novels, and overall feel restlessly misplaced, and indulge that tempting (yet taboo!) fantasy of lives lived elsewhere. And let's be honest, if you know anything about this part of the universe, you'll know that it seems designed to infuse any mildly poetic soul with a hefty dose of wanderlust. There are, after all, highways, stretching endlessly into glorious Texas sunsets, tempting one to get in the car and escape. The silence is punctuated by the nostalgia of oh-so-many songbirds, cicadas, and the lonesome whistle of trains. And in the spring, the air is scented with jasmine, as if to remind you that you long for romance, that romance does exist in this beautiful world, yet not in your life in a town where everybody marries young and goes to bed early. Am I being unfair? Of course! Solitude, Texas, is, after all, not a real place, but a caricature, and caricatures are prone to exaggeration. What is important, though, in a work of fiction, is not the accurate rendering of real places, but the emotional connection between imaginary people and readers who can share and understand their feelings. There's nothing that could make me feel happier as an author than knowing that Liliana's aimless drives away from Solitude resonate with a young woman whose adventurous spirit I admire, who also, unbeknownst to me, takes herself out for long drives through our lonesome yet magical landscape. 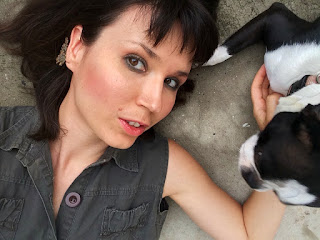 Maria Elena Sandovici moved to Texas on a Greyhound bus in the summer of 2005. It would be the beginning of a great adventure. Born in Bucharest, Romania, a place she loves and where she returns often, she’d spend the requisite time in Manhattan to call herself a New Yorker, but also to know she was looking for something else. Her debut novel, Dogs with Bagels, is very much a New York story: the story of an immigrant family forging new identities for themselves in the city that never sleeps.

Her second novel, Stray Dogs and Lonely Beaches, is the story of a young woman traveling the world in search of herself. This theme persists in Lost Path to Solitude, her third novel, in which characters suffering an identity crisis are caught in a search for the ideal place to call home. Three locales dominate the story: New York City, Bucharest, and an imaginary, caricaturized town in Southeast Texas, called Solitude.

In addition to writing fiction, Maria Elena Sandovici paints every day. She has a studio at Hardy and Nance Studios in Houston, and also shows her daily watercolors on her blog, Have Watercolors Will Travel, accompanied by essays about whatever inspires or obsesses her at any given moment.

To support her art and writing, she teaches Political Science at Lamar University. She is also the well-behaved human of a feisty little dog.

Her favorite places in Texas are Houston and Galveston.

GIVEAWAY! TWO WINNERS EACH RECEIVE  COPIES OF BOTH DOGS WITH BAGELS & LOST PATH TO SOLITUDE 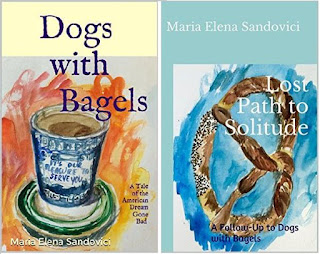