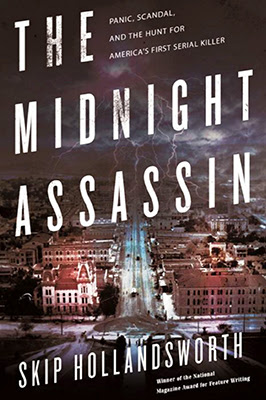 I reviewed The Midnight Assassin: Panic, Scandal, and the Hunt for America's First Serial Killer (Henry Holt) by Skip Hollandsworth for Lone Star Literary Life! This is the wildly entertaining first book from the executive editor of Texas Monthly. From the review:


Austin, Texas, in December 1884 was a rapidly growing modern city with 230 students enrolled at a brand-new university, a new pink granite state capitol under construction, an opera house, and a roller coaster. Prosperous gentlemen wore frock coats and ladies wore bustles. Reporters wore their hats “at jaunty angles” and hung out at the Horseshoe Saloon which sold a new beer called Budweiser. The Austin Police Department had twelve policemen. As the mayor liked to say, “No city has the promise of a more healthful prosperity!” And then for the next year and change someone “crisscrossed the entire city … using axes, knives, and long steel rods to rip apart women from every race and class.”

In a ridiculously entertaining, page-turning history, Skip Hollandsworth, award-winning journalist and executive editor of Texas Monthly, tells the story of these slayings in The Midnight Assassin: Panic, Scandal, and the Hunt for America’s First Serial Killer. Almost as mysterious as the still-unsolved crimes is how such a sensational story could be so little known, especially in Texas. Hollandsworth’s prodigious, dogged research provides an engaging history of Austin’s development. Details of life in Austin in the late nineteenth century add context and provide a particularly effective contrast with the extraordinary murders.

Click here to read the entire review.
Posted by Texas Book Lover at 12:00 AM