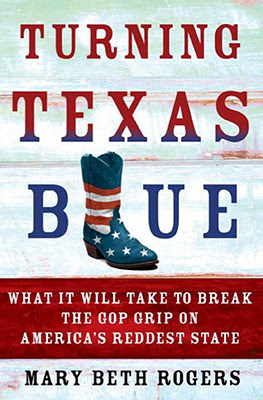 I reviewed Turning Texas Blue: What it will Take to Break the GOP Grip on America's Reddest State (St. Martin's Press) by Mary Beth Rogers for Lone Star Literary Life! I know we're all tired of hearing the phrase "turning Texas blue." We've heard it before and been sorely disappointed. However, Rogers, who managed the campaign that put the late, great Ann Richards in the governor's mansion, gives us hope. There's some especially interesting analysis of how we turned Dallas blue, once the most reactionary city in the state, and how we can apply the strategies to the entire state.


Mary Beth Rogers ran the last campaign that put a Democrat in the Texas governor’s mansion, the late Ann Richards. That was 1990. Since then Rogers, retired from the campaign trail, has watched aghast as “ordinary, business-oriented, conservative Republicans morph into crackpots and blustery buffoons” leaving “a path of political destruction and debris” in their wake. Fed up with waiting for the cavalry (“Democratic cleanup crew”) to arrive, Rogers studied the history of Texas politics, analyzed recent campaigns, and devised a ten-point plan to put Democrats back in state government. The result is Turning Texas Blue: What It Will Take to Break the GOP Grip on America’s Reddest State.

Combining amusing, occasionally snarky commentary with a firm grasp of the facts, Rogers addresses the numbers, strategy, and Big Themes, invoking Václev Havel, Twyla Tharp, Willie Nelson, and Royal Dutch Shell. She dissects the Battleground Texas experiment and the debacle of the Wendy Davis campaign. Rogers’s analysis is elementary for anyone who’s been paying attention but is a terrific primer for newcomers to the Texas political arena. Her history of the rise of the Republican Party in Texas (blame FDR, LBJ, Dallas, the Civil Rights Act of 1964, and Ronald Reagan) is comprehensive and engaging for veterans of the scene and new recruits alike. Rogers posits a theory that the election of Ann Richards and her push for inclusiveness actually helped to bring about the current state of affairs by challenging the status quo and the “most powerful economic interests in the state,” thereby sparking a backlash from traditional power bases. “The essence of conservative politics in modern life has always been to reclaim what is lost, or is about to be lost, if power slips away. That’s what happened in Texas in the 1990s. It has happened repeatedly since then.”