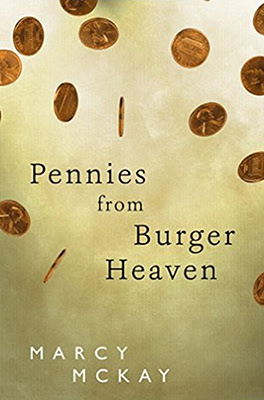 I reviewed Pennies from Burger Heaven (SkipJack Publishing) by Marcy McKay for Lone Star Literary Life. This is a mixed review. A very dark narrative from the point of view of a small child is a difficult technique. McKay is great with characterization but lets the plot run away with her. Stay tuned for the second installment in the planned series before you make up your mind. From the review:


Copper Daniels, a brash and scrappy eleven-year-old girl, and her mother, Corrine, are homeless. They sleep beneath a statue of an angel in a cemetery in the fictional Texas city of Remington. One morning Copper awakes alone. Corrine is missing and Copper, terrified that her mother is one of the “Disappeareds,” the latest victim of a serial killer stalking the “Nobodies” of Remington, sets out to find her. Copper searches for clues to her mother’s disappearance while dodging pimps, junkies, the police, televangelists, and gangbangers who are also looking for Corrine. Copper, prickly and paranoid, must learn to trust someone besides herself, accept help, and be a better friend if she’s to survive the hunt.

Pennies from Burger Heaven, Marcy McKay’s first novel and the first in a planned series, won the Writers’ League of Texas Best Mainstream Novel manuscript contest in 2015. This is an almost unrelievedly grim and painful story. The relationship between Copper and her mother is not a proper one of parent and child. “We’re way more than mother and daughter,” Copper says proudly. “We’re business partners and best friends.” They panhandle for cash on street corners, and when that proves insufficient to support her mother’s meth addiction, Copper hides under the bed in by-the-hour motel rooms while Corrine earns more money on top of the bed.