REVIEW: THE TRIUMPH OF WILLIAM MCKINLEY by Karl Rove 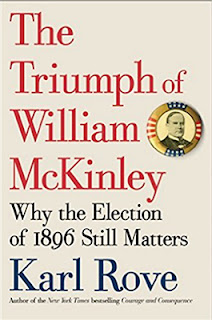 I reviewed The Triumph of William McKinley: Why the Election of 1896 Still Matters (Simon & Schuster) by Karl Rove for Lone Star Literary Life. No matter your politics, this is an excellent history and analysis. From the review:


So why does the election of a president more than one hundred years ago still matter today, you may well ask.

In an era when the nation was profoundly split between the South and the West, the North and the East, conflict between debtors and the financial class, sometimes fatal fights over how the economic pie should be allocated, and both parties employed procedure to gridlock Congress and caused the people to declare the whole place incompetent, McKinley circumvented the Republican party chiefs and “was the first president in more than two decades to win with a significant popular majority.” How did McKinley build a winning coalition out of these disparate interests?

The Triumph of William McKinley: Why the Election of 1896 Still Matters is Karl Rove’s lively, briskly paced, and meticulously organized answer to that question. But this book isn’t limited to the election; it is also a primer on American history, politics, and economics during the decades immediately following the Civil War. It compares and contrasts the politics of then and now and reminds us that history and politics are cyclical, and that there are patterns to be discerned and learned from, as is made evident in the modern campaigns of Nixon and Reagan. Perhaps someone should hide this book from Trump.

Please click here to read the entire review.
Posted by Texas Book Lover at 12:00 AM