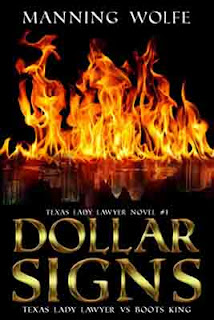 My review of Dollar Signs: Texas Lady Lawyer vs Boots King (Starpath Books, LLC) by Manning Wolfe was published in Lone Star Literary Life! This is Wolfe's debut legal thriller which won a Writers' League of Texas manuscript contest in 2014. From the review:


When Tarantella Estevez set fire to the billboard looming over his tire shop he didn’t consider all of the junked vehicles parked on the lot beneath it. And how could he know that a homeless man was sleeping in one of those cars? So when the billboard buckles and falls flaming onto the vehicles below, and the gasoline in their tanks ignites, a simple charge of vandalism becomes manslaughter and Austin lawyer Merit Bridges, the Estevez brothers’ real estate attorney for a case involving the aforementioned, now incinerated, billboard, is cast into unfamiliar criminal waters. Boots King (“slippery as snail snot”) is an ethically challenged leasing agent employed by the owner of the billboard company to con trusting property owners into outdoor advertising contracts with some highly suspicious language buried in the small print. Boots isn’t averse to getting his hands dirty in a little wet work when called upon by his boss.

Dollar Signs: Texas Lady Lawyer vs Boots King is a legal thriller by Manning Wolfe,the winner of a Writers’ League of Texas manuscript contest, and the first in a planned series. Manning brings her legal education and years of experience practicing law in Austin to bear on this promising debut. She even manages to make the minutiae of contracts and real estate law and procedure interesting (seriously — y’all stop laughing).

Click here to read the entire review.
Posted by Texas Book Lover at 12:00 AM