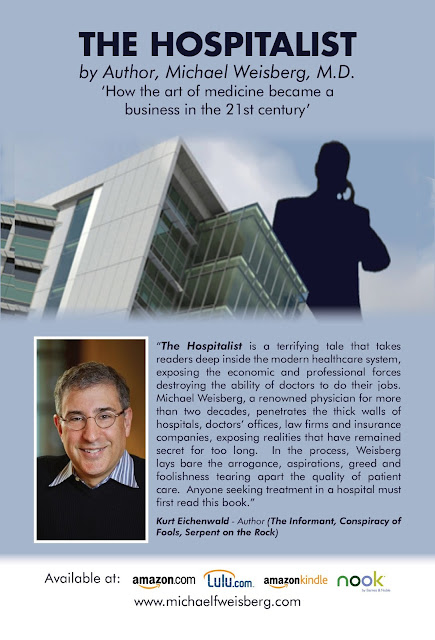 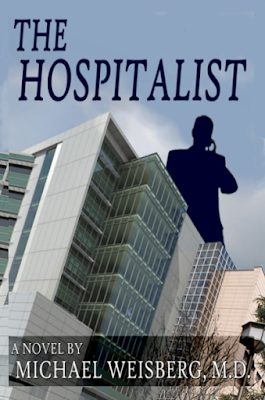 What happens when you are admitted to the hospital as a patient, and the physician assigned to be your doctor has never seen you before and knows absolutely nothing about you?

Welcome to Medicine in the 21st century, where the results of having a Hospitalist instead of your own doctor can be disastrous.

Specialist Dr. Aaron Bernstein enters the world of the Hospitalist firsthand when he confronts a schizophrenic patient who -- literally -- is a ticking time-bomb.

Dr. Michael F. Weisberg
Dr. Michael Weisberg has been a practicing gastroenterologist for over 23 years in Plano, Texas. He is board certified in Internal Medicine and Gastroenterology.

He has been recognized as a ‘Super-Doctor’ by Texas Monthly and named to D Magazine’s list of best doctors eight times. Dr. Weisberg also serves as a board member of Digestive Health Associates of Texas.

Dr. Weisberg has written stories throughout his medical career. In 2011 he won first prize in a short-story competition sponsored by Presbyterian Hospital of Dallas.

The Hospitalist is Dr. Weisberg’s first novel. He is currently working on his second novel.

He lives in Dallas with his wife and three children.

1. What made you want to share your story and write this book?


About a decade after I started practicing medicine, I started noticing the arrival of doctors who only practiced in the hospital. At that point there wasn’t really a term for these doctors. Now we know them as ‘hospitalists.’ Parallel to this time frame I was writing my novel and in the process of planning the story arc, a friend pointed out to me that the concept of the hospitalists was a new, major change in how patients experience health care. At that point I decided to make a hospitalist the center of my book.

2. What is the most important thing you have to do as an author of fiction that covers such a realistic topic?

You have to make the book realistic enough so that people feel like they are experiencing the story. This pulls the reader into the story and they have an interest in continuing to read further. I then sensationalize ‘real world’ things going on in medicine to help drive certain points home. The use of satire or humor is also important. I approach writing as a balancing act, incorporating humor, real world experiences and polishing it with drama.

3. What do you want people to take away from reading this book?

My objective through this fictional medical thriller is to illustrate how difficult it can be for patients and physicians to navigate through today’s healthcare system. Here’s the frustrating aspect of medical care today – the physicians who know the patients stay in their offices, and patients have to get to know a new physician during times of serious illness – when they are in the hospital. For this reason, one of the takeaways of my novel is the importance of having an advocate with you or a loved one during a hospital stay.

4. At what point in your life/career did you decide to become a writer?

All of my life, I’ve wanted to be a writer. I grew up in a small town where there weren’t many forms of entertainment. Reading was my pastime. One of my early homework assignments in sixth grade was to keep a journal. That experience fueled my interest in writing stories.

5. What value do you think realistic fiction adds to society?

Realistic fiction channels a writer’s ability to bring characters together who in real life may not be together. Reality by itself may be boring. However by combining reality with fiction, these characters are allowed to interact and we enjoy seeing the outcomes. This is the real importance of how realistic fiction adds to society.

6. Were you an avid reader as a child and/teen? What were some of your favorites?

I loved to read as a child. When I was nine, a magazine published one of my poems. Coincidentally I’ve included that poem in The Hospitalist. My favorite books growing up were Catcher in the Rye by J.D. Salinger, Lord of the Flies by William Golding, and In Cold Blood by Truman Capote. When it came time to declare a major as a student at Vanderbilt University, I chose to major in English literature and minor in linguistics. In college, my favorite books to read were Ulysses by James Joyce, Women in Love by D.H. Lawrence, and Wuthering Heights by Emily Brontë.

7. Were you curious as a child? How did you explore things you were curious about?

Yes, and I believe my curiosity was sparked by my mother. She was a stay-at-home parent who had completed high school at age 16 and had graduated from Yale Law School at age 22. She stayed at home to raise her children and was a constant resource to answer any question while I was growing up. Additionally I credit one of my elementary school teachers, Francis Boyd for cultivating my curiosity. Ms. Boyd had travelled to many countries because her husband had been in the military. She made geography and history lessons visual by sharing souvenirs and stories of her real experiences in various countries. I stayed in contact with Ms. Boyd until I graduated from medical school. It’s important to mention that theatre brought stories alive for me as well. I was in various plays from Christmas Carol to Julius Caesar. I was introduced to Shakespeare in 6th grade and by the time I finished college, I had read all of his plays except for two.

8. What or who would you say has had the greatest influence on your life? On your writing?

As a child growing up in Huntington, WV, I was very sick and my illness required many hospitalizations. Dr. Robert Kopp was my physician and he had use of one leg due to being afflicted by sepsis. He was the most compassionate physician and early on became a role model for me. When I was too sick to leave the house, he would drag himself up the stairs of our two-story house to see me and examine me. My mother first planted the suggestion early in my childhood to become a doctor. Dr. Kopp demonstrated by example and influenced me to become a doctor who cares about patients. As a writer, my parents were a great influence. My Dad always told me that he was going to write the best book ever – the book of all times. He never did but his dream inspired me to write. My mom was influential because she was always reading, writing and appreciating culture. She was my go-to person and resource for good things to read.

9. Do you plan on writing other fiction on this topic? What else is on the horizon in the writing world of Michael Weisberg, M.D.?