THE BOYS by Toni Sala 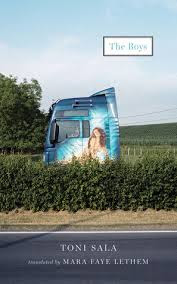 My review of The Boys (Two Lines Press) by Toni Sala, translated from the Catalan by Mara Faye Lethem, was published by The Rumpus! From the review:


Vidreres, a village in the restive Catalonia region of Spain, has been hit hard by the global recession of 2008. It sustains a further blow when Jaume and Xavi, two of its promising young sons, are killed in an automobile accident. “The fierce screech [of the tires] had flown over the fields, appearing on the streets of Vidreres with such violence that the next day the townspeople found tire skid marks in the hallways of their homes, on their sofas, in their showers, on their sheets.” In The Boys, Toni Sala paints a portrait of the impact of globalization and generational conflict on Vidreres—a very particular place and time—through the reactions of four characters to the deaths of the young men.