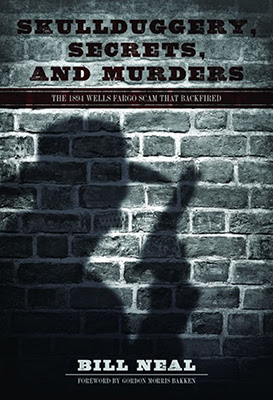 I reviewed Skullduggery, Secrets, and Murders: The 1894 Wells Fargo Scam that Backfired (Texas Tech University Press) by Bill Neal for Lone Star Literary Life! Stories like this one are how the "Wild, Wild West" got its name.


Bill Neal, writer, historian, and retired criminal attorney, gave a book talk in Canadian, Texas, a few years ago where a woman took him aside to quietly warn him not to “get into that Isaacs mess.” Naturally, as any proper writer, historian, and lawyerly type would, Neal became curious. The result is Skullduggery, Secrets, and Murders: The 1894 Wells Fargo Scam that Backfired, the latest volume in Texas Tech University Press’s American Liberty and Justice Series, which is sort of ironic, because while there’s quite a lot of liberty, there’s precious little justice in this tale.

In November of 1894, George Isaacs and a motley collection of outlaws and wannabes attempted to swindle $25,000 out of Wells Fargo. They planned to hold up the train between Kansas City and Canadian, Texas, but something went awry and before they could rob the Wells Fargo agent at the depot in Canadian, the sheriff was shot dead and the outlaws were on the run.

To read the entire review, please click here. Thanks!
Posted by Texas Book Lover at 12:00 AM