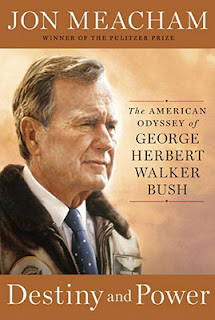 My review of Destiny and Power: The American Odyssey of George Herbert Walker Bush (Random House) by Jon Meacham was published by Lone Star Literary Life. From the review:


When George Herbert Walker Bush was five years old his school report cards included the category “Claims More Than His Fair Share of Time and Attention in Class.” His parents didn’t worry about this category. Bush’s nickname was “Have-Half” because he split everything he had with friends. Eighty-five years later he is much the same.

Destiny and Power: The American Odyssey of George Herbert Walker Bush is Jon Meacham’s account of the life of the forty-first president, “a child of one generation’s ruling class, the head of another’s, and the father of yet a third.” Meacham presents Bush as a man of humility and compassion as well as ambitious and deeply competitive, a believer in compromise, diplomacy, and the power of personal relationships.

A well-balanced account, Destiny and Power progresses briskly and never belabors a point. Meacham provides insightful analysis of family dynamics in Bush’s formative years, a recitation of the facts liberally leavened with anecdotes, and a good mix of formal and candid photos. Meacham had access to Bush’s diaries that he spoke into a hand-held recorder which provides a sense of immediacy—Bush’s thoughts in real time.

Click here to read the entire review. Thank you!
Posted by Texas Book Lover at 7:55 AM