BATS OF THE REPUBLIC: AN ILLUMINATED NOVEL 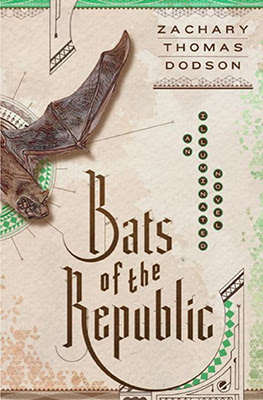 My review of Bats of the Republic: An Illuminated Novel (Doubleday) by Zachary Thomas Dodson was published in Lone Star Literary Life. This novel may be the rarest of treats - something new under the sun. From the review:


In 1843, naturalist Zadock Thomas sets out from Chicago on an urgent mission to deliver a letter from his employer to a general in the Republic of Texas. At the same time, sort of, in the post-Collapse, post-United States of 2143, Zeke Thomas’s grandfather, a senator, has just died and Zeke is next in line for the office, which is now determined by bloodline. Seven senators compose the governing body of the remaining seven City-States, a totalitarian surveillance regime where writing implements and private documents are illegal. Zeke’s grandmother gives him an old letter of his grandfather’s that has never been opened because the family is frightened the letter may cast doubt on the Thomas bloodline. Then the letter goes missing.