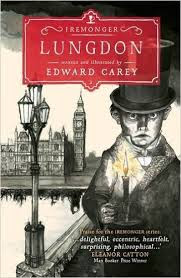 “There has been no light. Not for days now. We all live in darkness and pretend it is the most natural thing. … It has been like this ever since the new family moved into the house across the street.” – Report from a Bedroom Window (from the journal of Eleanor Cranwell, aged thirteen, 23 Connaught Place, London W)

The new family across the street is the Iremonger clan, birth objects in tow, who have escaped the destruction of Heap House and Foulsham, and come to forbidden London to infiltrate, plot (Guy Fawkes style), and wreak a most Iremonger-ish vengeance. The British government has instituted a quarantine of anyone who managed to escape its incineration of Foulsham and harboring survivors of the conflagration is a crime. The heretofore gentle, anxious, pitiable Clod Iremonger and the huge-hearted, democratic, limitless Lucy Pennant have been separated again: Clod held prisoner by his family and Lucy presumed dead in the smoking ruin of Foulsham.

Inexplicable things are happening to the people and things of London: school desks sprout fifth legs, hat stands weep, fire extinguishers grow taller, a terrestrial globe in a stateroom in Buckingham Palace has come down with pox, orcs are ubiquitous and doppelgangers lurk, people disappear and objects appear. In short, rotten Iremongers are spoiling everything. Clod has begun to understand the secret to the strength of his telekinetic power over objects and begins to exercise this power. It is up to Clod to save his family or save London. Confused, manipulated, angry, and heartbroken, Clod the diffident becomes Clod the righteous conjurer and he must choose. Lungdon, the final volume in the Iremonger Trilogy, is the tale of how Clod earns his trousers.

When I was offered Lungdon for review, I was familiar with Edward Carey’s work but hadn’t read the Iremonger books yet. So I began with Heap House and immersed myself. I was instantly charmed by Edward Carey’s fully-imagined, uniquely brilliant universe, where neither people nor objects are what they seem, enhanced by his own clever, mildly disturbing black and white illustrations. Lungdon and its predecessors are a fantastical brew of Charles Dickens, Edgar Allan Poe, Lewis Carroll, and Tim Burton, borrowing from the Brothers Grimm and the Pied Piper of Hamelin.

Carey’s lyrical style in the Iremonger series reminds me of the free-association of the Beat poets. Here Clod is lamenting the destruction of Heap House:

“Our home, old home, old place, disgraced and thrown over, blackened, cracked, forlorn, forgot, death place, dead home, death knell, pell mell, gone and gone and never ever to return. They pulled it down. And never will it up again.”

Carey is adept at causing panic with a very few words, usually in a chapter heading, such as: “Concluding the narrative of…” Consider possible implications of the word “concluding.” He is also funny, as in this wry dialogue, a comedy of manners, between Clod and his betrothed (reluctantly on his part – an arranged marriage, as per Iremonger tradition), cousin Pinalippy:

The action passages are exciting, the imagery vivid, as when Clod discovers the awesome strength of his power:

“I tugged it and it came free. With my eyes tight shut I moved the house on Connaught Square, ripped it away from its neighbors, I walked with it, it came along with me. As I stepped forward in the drawing room downstairs, with each step I moved, the house came with me, so that as I walked I seemed to make no progress because the house was keeping up with me, the faster I walked towards the wall, never reaching it, the faster the house smashed through the square. Out of the broken windows I saw flames going by. On the move, a whole house alive and moving. Oh the great wonder of it!”

The final reckoning shifts points of view in an unbroken stream, a very effective technique conveying the confusion, speed, and urgency of events, culminating in a satisfying resolution.
Using multiple first-person narratives, including Queen Victoria, Carey explores big themes in Lungdon: liberty, compassion, love, commonalities, greed, power, corruption, and the denigration of the “other,” resulting in The Big Lie which births, nurtures, and spreads fear. We are individuals, not cogs in a machine; we are not to be acted upon; agency is a birthright by dint of existence, requiring no further justification. The dichotomy of “either/or” and “me or you” is revealed as false. As Clod anguishes:

"Oh this business of human feeling, of keeping the engines, all the tubes of thoughts and emotions, all the cogs of love and like and hate, what a great effort it all was! How to make sense of how another person tocs and ticks, how to read their eyebrows and lips… There is no instruction manual for that.”

All of that wrapped up in a story aimed at the age ten and up crowd, according to the back cover. I am considerably older than the target audience and I was enchanted. You will be, too.

BONUS: The Overlook Press has generously offered two sets of the Iremonger Trilogy for a giveaway. Check back Tuesday, November 3rd, to enter the contest!
Posted by Texas Book Lover at 12:00 AM