BUFFALO TRAIL: A NOVEL OF THE AMERICAN WEST 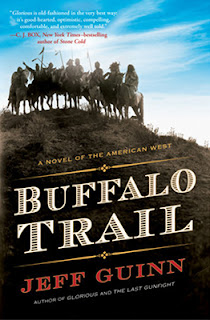 My review of Buffalo Trail: A Novel of the American West (Putnam Books) by Jeff Guinn was published by Lone Star Literary Life! From the review:

Cash McClendon has departed Arizona Territory in a hurry and washed up in Dodge City, keeping company with Bat Masterson and Billy Dixon, learning the trade of the “hidemen” who follow the great buffalo herds, trying to earn enough money to get back to Gabrielle, his lady-love, whom we’ve met in Glorious. The buffalo have been hunted out of existence in Kansas, so Dixon is putting together a large hunting party to follow the herds into Indian Territory. Simultaneously, Quanah Parker of the Comanche is attempting to put together a massive war party, including the Cheyenne and Kiowa, to convince the white men to stay on their side of the line. When these two groups collide in the Texas panhandle, it will be known historically as the Second Battle of Adobe Walls.

To read the entire review please click here. Thank you!
Posted by Texas Book Lover at 12:00 AM