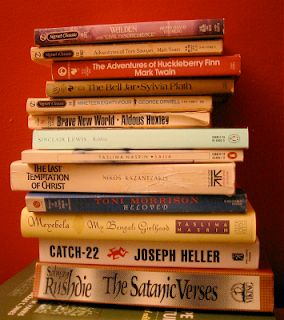 The American Civil Liberties Union of Texas has produced a report on attempted book banning by Texas school districts for the last 19 years. I am delighted to report that challenges and actual bans decreased again last year. Out of 13 challenges, 2 books were banned in Texas schools during the 2014-2015 school year. The two books banned outright are Hans Wilhelm’s I Hate My Bow at Red Lick Elementary School and Andy Riley’s The Book of Bunny Suicides at Chapel Hill Junior High.

The results of this report are below and include the reasons given for each challenge, which makes for some amusing reading. Sometimes I just want to shake somebody and holler, "Get a grip!"

Special mention for an outstanding job: Irving ISD and Round Rock ISD - Thank you for taking a stand.

Special mention for causing me a face-palm: Red Lick ISD (AGAIN) - for removing I Hate My Bow by Han Wilhelm because of a parental objection to the word "hate."

Very very special mention for being totally clueless - The parent who objected to Santa Clause Around the World by Lisl Weil.

Book: Santa Clause Around the World by Lisl Weil
School: Powell Elementary
Reason Cited: Violence or horror; “There was a description of a horned figure taking children”
Action Taken: Retained