Excerpt: HAIL OF FIRE: A MAN AND HIS FAMILY FACE NATURAL DISASTER 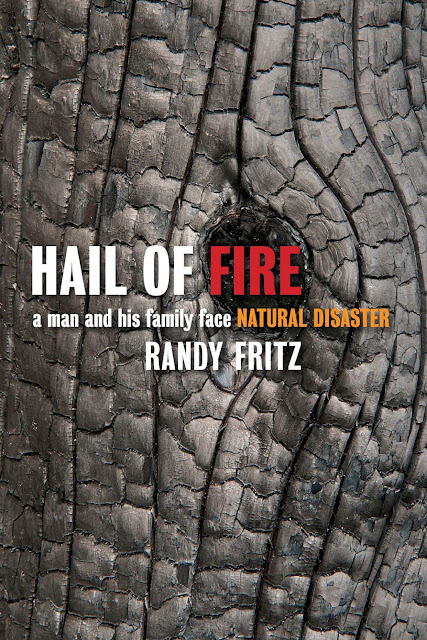 Hail of Fire: A Man and His Family Face Natural Disaster is an intimate account of the third worst wildfire in modern U.S. history, and the most destructive in the history of Texas. It is a memoir of what happened to Randy Fritz, an artist turned politician turned public policy leader, and his family during and after the Bastrop County Complex fire in September 2011. Combining a searing account of the fire as it grew to apocalyptic strength with universal themes of loss and grief, Fritz gives a first-person account of the emotional turmoil that comes with rebuilding one’s life after a calamitous event.

The wildfire itself was traumatic to those who witnessed it and suffered its immediate aftermath. But the most significant impact came in the months and years following, as families grieved, struggling to adapt to a new world and accept the destruction of an iconic forest of internationally acclaimed great natural beauty—the Lost Pines. Neighbors once close worried for each other, while others discovered new friendships that transcended the boundaries of race, class, and family lineage. Fritz struggled as his wife and daughter tried to make sense of their losses. He never imagined the impact this disaster would have on them individually and as a family, as well as the visceral toll he would pay in the journey to make sense of it all.

Hail of Fire is an unflinching story of how a man and his tight-knit family found grace after losing everything. Fritz’s hard-won insights provide inspiration to anyone on the search for what truly matters, particularly those who have undergone an unexpected and life-changing event and those who love and care for them.

Praise for HAIL OF FIRE

“If you've ever loved a tree—or a person—do yourself a favor: read this book, because at its core love in all its splendor and sadness is what it’s about.” — Jan Jarboe Russell, author of The Train To Crystal City

“The power of the book is in the recovery.... [Fritz] finds “mindfulness and acceptance” and the strength to make a fresh start in a place with haunted memories.” — Kirkus Reviews

“Randy Fritz has written a mesmerizing account of the Bastrop fire, the worst in Texas history and one of the worst ever nationally. The heart of Hail of Fire is how an everyday citizen survives the angst and awfulness of a natural disaster. Highly recommended!” — Douglas Brinkley, author of The Great Deluge: Hurricane Katrina, New Orleans, and the Mississippi Gulf Coast

“In this painstakingly written story of ruin and renewal, Fritz eloquently reflects on how the events of the Bastrop fire of September 2011 and their aftermath transformed him, his family and the lives of their closest friends and neighbors.” — San Antonio Express-News

“As Fritz and his family deal with shock, instability, and the stress involved in trying to move forward, their perseverance and strength, and that of those around them, demonstrate that life definitely can rise from the ashes.” — Booklist

“Though the title of his memoir of the 2011 Bastrop wildfire might suggest that readers will be placed right in the middle of one of the worst conflagrations in Texas history, this Lost Pines resident is more interested in what followed: the displacement of his family after the loss of their house, and the fraught debate over whether to rebuild or walk away from their longtime home.” — Texas Monthly

“Every time a fire destroys a family’s home, the media shows up right away to cover the disaster and report what’s happened. But not very often does the media ever tell you what happens after the fire because most victims don’t have the emotional strength to speak out while the smoke is still in the air. This story is told through the eyes of Randy Fritz who experienced the third worst wildfire in modern U.S. history. He tells the story of grief, loss and how his family rebuilt their lives after the calamitous event.” — San Francisco Book Review

Fritz is at his best when he recounts the impact the fire had on his own psyche, with raw reflections on the difficult time he had coping and how his depression became difficult for his family. — Foreword Reviews

My business was urgent. But I stopped at an overlook several hundred feet above the highway. I needed to know if I was about to drive into the fire’s maw.

The last time I was here—early afternoon the previous day—cars and pickups were parked at cockeyed angles. The conversations I joined or overheard over the wind’s moan were a mixture of resignation and threadbare hope. Nobody knew for sure what was happening on the ground, but there were a lot of theories.


I was certain some of my overlook companions were already wiped out, like my friends at the motel, or about to be. Others would be fine by the time it was all over. I couldn’t imagine how the lucky, including me, would fight back their guilt, or the unlucky their anger and bitterness.

From our vantage point, the fire took on two forms. The main one was a vast and heaving cloud of smoke towering many thousands of feet above us. It filled our entire western and southern visual horizon. While it was mainly white, there were dark streaks and blotches in it and lighter spots where the blue sky behind it was almost visible.

The other form was a yellow curtain of flame hanging and writhing over the ground. Within it, sharp bursts of light appeared and almost immediately vanished. Each one was like a tweet from the fire informing us that another home had been claimed and the secure future of another family forfeited.

While we were a small community of collective ignorance, there was one thing we knew: this fire was vastly more dangerous and destructive than the one two and a half years earlier that took three helicopters, two airplanes, and twenty-two fire departments to contain.

That one worried us. This one terrified us.

That one threatened dozens of families. This one was a predator of hundreds, if not thousands.

That one surrendered in a week. This one looked like it might never give up until its gluttony expired for lack of food.

Labor Day 2011 was the first day of a new era in Bastrop County, one in which its most prominent and beloved feature—the Lost Pines—would be ugly and desolate for many years. For those of us in middle age or beyond, our deaths would precede the rejuvenation of the forest into the bounty of life it was when we built our homes and started our families.

1) You have a very interesting professional background. Do you think your past dealings with natural disaster response helped you look at your story from a different perspective than the other victims of the fire?

Yes. As the fire progressed, I was able to imagine what was happening in the emergency operations center and in the field. I was also able to understand that the magnitude of the fire probably meant that keeping people out of harm’s way was the most important job in the first two days. That was a mixed blessing. It was comforting to know that many lives were probably being saved. But it wasn’t comforting to know that property damage and the loss of the forest couldn’t be stopped.

2) Why did you feel this was a story that needed to be told?

3) What steps did you take to prepare for writing this memoir?

I created an outline of the events I wanted to highlight and the people outside of our family whose stories also needed to be told. Talking about my experiences in therapy helped clarify what aspects of my story I felt needed to be told.

4) What resources or tools did you find useful in writing this book?

5) Recalling memories is so important for writing memoirs. Did you do anything special to help recall the events, and their sequence?

I consulted e-mails I had sent, e-mails I received, notes I made on my smartphone, and my post-fire calendar.

6) Had you ever considered writing before the events of this book happened?

I had never considered writing a book. However, I do quite a bit of writing in my professional life.

7) Did you find that recalling the details of the events painful, therapeutic, or both?

They were both. Some of the more emotional events were difficult to re-live through my writing. But, in general, writing the book helped me understand and appreciate the positive things that have happened since the fire.

8) Why do you think memoirs are important to our culture?

A well-written and well-conceived memoir gives readers the opportunity to closely identify with, and learn from, the experiences of someone from whom they can learn or better understand their own experiences. In the case of a memoir that deals with a difficult experience that many people have, it is a way to give voice to those experiences and feelings, to validate them, and give them a certain universality.

9) What was your biggest obstacle to writing this book?

The blank computer screen. It’s hard to type those initial words every day. I find revision very enjoyable, and the best part of the process. But the initial writing is tough, tough, tough.

10) What did you learn, about writing and publishing, from this experience?

That writing in itself is a good thing to do, regardless of what happens down the line.

11) Can we expect more writing from Randy Fritz in the future?

We’ll see. I’m interested in the answer to that question myself.

12) Tell us about your upcoming appearance at the Texas Book Festival in Austin, TX next month.

I am a long-time Book Festival attendee. So it is very exciting, and a little humbling, to be a participant this year. I can’t wait to share my book with some of the super-passionate readers that come to the Festival. 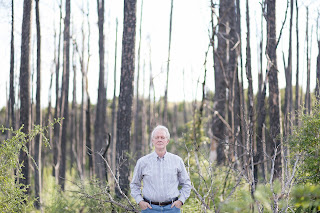 Randy Fritz is the former chief operating officer of the Texas Department of State Health Services, the state’s public and mental health agency. He helped coordinate the state’s response to Hurricanes Katrina and Rita and led the team that implemented the Children’s Health Insurance Program in Texas. Fritz lives in Bastrop, Texas, with his wife, Holly, and their youngest daughter, Miranda.

Posted by Texas Book Lover at 8:38 AM