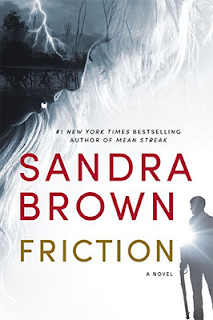 My review of Friction (Grand Central Publishing) by Sandra Brown was published in Lone Star Literary Life! From the review:


Texas Ranger Crawford Hunt is in the witness box in Judge Holly Spencer’s courtroom for a custody hearing that will determine whether he regains custody of his daughter, Georgia, from her maternal grandparents, when a gunman bursts through the doors. Hunt throws himself atop the judge to protect her and then pursues the gunman when he flees the courtroom. Hunt confronts a man on the roof holding a gun, and SWAT takes him out. As the investigation proceeds, doubts about the identity and motivation of the suspect arise and Ranger Hunt’s past comes back to threaten him and those he loves in the present.

Friction is peopled with a diverse cast of characters, from judges and law enforcement to campaign managers, crime bosses (those are not the same thing), strip club operators, and veterans. Ranger Hunt and Judge Spencer are given complex and believable backstories. Unfortunately, Judge Spencer either doesn’t stay in character or has multiple personalities. She morphs from an ethical, by-the-book, no-nonsense dispenser of justice into a quivering mass of ethically challenged hormones who allows herself to be frog-marched about by Ranger Hunt. I had hoped we were past the repressed, buttoned-up career woman who needs a real man’s man to free her essential femininity trope.

To read the entire review click here.
Posted by Texas Book Lover at 12:00 AM