THE PRISON TRILOGY
by Glen Aaron

Summary of Book 1 of The Prison Trilogy -- Observer: The Ronnie Lee and Jackie Bancroft Spencer Morgan Story, a tale of people, greed, envy, manipulation... even crime! 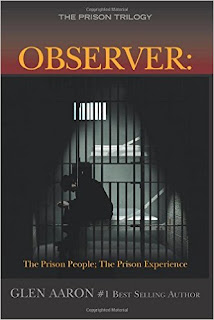 When Jackie Bancroft's husband died in 1952, he left her an heiress to the income and value of The Wall Street Journal and one of the wealthier women in America. Almost 50 years later, Jackie would marry Ronnie Lee Morgan, a 50-year old gay interior decorator. Morgan was one of many clients in the active law practice of author Glen Aaron. This unusual marriage lasted until Jackie's mysterious death five years later. Throughout that period, Aaron became entwined in the personal lives and demands of the couple, along with handling many of their legal affairs. The huge money and property distributions made by Jackie to her husband, designed and handled by Aaron, resulted in a two-year federal prison sentence for Aaron. The first book in the trilogy is that story.

THE OTHER TWO BOOKS IN THE SERIES: 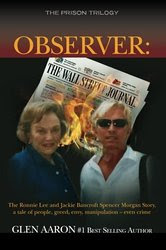 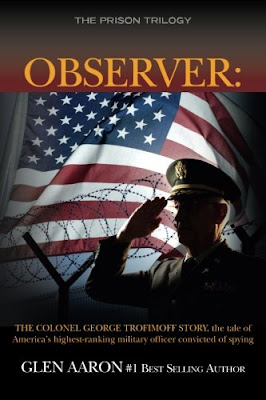 "Jackie had built an invisible shield. How she felt, who she was deep inside, was insulated by what might be called "Jackie logic." In a personal encounter, she could be brutally blunt by pointing out a physical imperfection or character defect of the person she was talking to. "You're too fat. You should do something about it." "You're not my friend. You just want my money." She used innumerable clichés and platitudes for defensive purposes, designed to throw the other person off their game. Over the years, her repertoire grew with use. That "devil take the hindmost" attitude she had had since childhood gave her the confidence to not care what people thought of her. It was they who were after her, not she who was after them. On occasion, she would joke with me that this aspect of her personality was because her parents were first cousins.


"Wealth, extreme wealth, attracts a type of court, as in the days of Louis XIV, that some of these people want to be a part of. It gives them meaning to be seen rubbing shoulders with others of the coterie. Even if the Queen, in this case, Jackie, is not present, there is a sense of acceptance when the court is in session, each person wondering about the others’ special relationship with Jackie. Is it more special, more personal than theirs? This is the social effect of it: The pushing and crowding for pecking-order position, to be that special one who knows the lady just a little better than the next, or to casually say, "When I was having dinner with Jackie the other night…," or to drop some other offhand remark indicating one's special privilege with Jackie. None of this is so much about money as it is about being accepted and part of an honored, moneyed circle. To the social elite, real or imagined, you are known by the clubs to which you belong and those with whom you associate. If you can claim a special or private relationship with a powerful, rich, or influential person, then you are one up on the rest of the group. You are who your friends are, whether they are really your friends or not."

Glen writes both fiction and nonfiction from his forty-year career and experience as a trial lawyer and consultant in international business and banking.

His nonfiction work as the observer in The Prison Trilogy tells the tales, in chronological order, of how he came to be a lawyer for a Wall Street Journal heiress and her gay husband, and how that representation landed him in federal prison. That is the first in The Trilogy. The second book tells the story of his cellmate, Colonel George Trofimoff, serving life for spying for the KGB. The final book of The Trilogy describes the prisoners, Glen's experiences and takes a hard look at the American criminal justice system.

Blog Tour brought to you by
LSLL BLOG TOURS