My review of Ten Million Aliens: A Journey Through the Entire Animal Kingdom by Simon Barnes 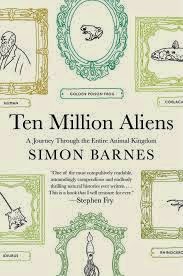 Ten Million Aliens: A Journey Through the Entire Animal Kingdom by Simon Barnes

Fact: Octopuses are the only known invertebrates to use tools, arranging coconut shells to create a hiding place.

"[F]rom so simple a beginning endless forms most beautiful and most wonderful have been, and are being, evolved." -- Charles Darwin, The Origin of Species

Ten Million Aliens: A Journey Through the Entire Animal Kingdom, by British journalist and novelist Simon Barnes, is a delightful collection of short essays extolling the weirdly wonderful natural world. In the manner of your favorite high school biology teacher, Barnes employs cheeky wit, fervor, and plenty of pop culture (Beckham, Harry Potter, Woody Allen, James Bond, Dr. Who, The Beatles) and literary references (Kipling, Joyce, Whitman, Voltaire, Euclid, haiku, King Lear) to transform zoology and evolutionary theory ("the eternal jazz musician, making it up as it goes along") into pure fun for us laypeople. Covering the entire Animal Kingdom seems a daunting task, but Barnes turns it into a romp.

Fact: 25% of all known life forms are beetles.

This representative example of essay titles gives you a clue of how much fun this is going to be: "Sex and the Single Slug," "Lemurs and Archbishops," "The Profile of Winnie-the-Pooh," "Infernal Agony of Gelatinous Zooplankton," "The Nausea of Charles Darwin," "The Kalahari Ferrari," "James Bond and the Kraken," "A Miraculous Draught of Newts," "Axis of Weevil." See what I mean? And don't disregard the footnotes -- Barnes is fond of them and they often contain quotes from Watership Down, The Wind in the Willows, Finnegan's Wake, The Great Gatsby, and The Hitchhiker's Guide to the Galaxy. Illustrations, charmingly simple line drawings in elaborately carved frames, are scattered throughout the book, beginning with Darwin and concluding with the author on the back jacket flap, adding to the whimsy.

Fact: The fastest bird is the peregrine, clocked at 200 mph in a dive.

"Once upon a time, almost all life on earth consisted of single cells. [The] great diversification of living things began around 550 million years ago, with the Cambrian Explosion. [...] The rest of the evolution of the Animal Kingdom has been a series of refinements and developments on this single brilliant idea of multicellular life."

Above all, Barnes wants you to understand that we, too, are animals (kingdom: animal, class: mammal, order: primates, family: hominids, sub-family: hominini, genus: homo, species: sapiens) -- one among many and not really so different from the others. "The meaning of life is life and the purpose of life is to become an ancestor. All forms of life are equally valid: the beautiful, the bizarre, the horrific, the obscure and the glorious." Barnes wants you to feel the kinship and "celebrate... the virtuosity of nature."

I often laughed and furiously texted friends with new-found facts and figures about octopuses (do not call them octopi -- Barnes explains why in a footnote having to do with Greek and Latin and... yeah), the New Zealand short-tailed bat ("which drops to the ground and scurries about like a mouse wearing a cape") and naked mole rats ("like a pair of teeth animated by a pink sausage"). That last bit about the naked mole rats caused me to aspirate hot tea during a fit of laughter. While humor abounds, Barnes is also capable of producing a gorgeous turn of phrase. Describing a species of Ctenophora: "One species is an absurdly lovely thing called Venus's girdle: more like a piece of abstract elegance designed to recall a wing than a living creature." Describing hummingbirds: "jewels that hang in the air as if air were something you could perch on."

Fact: Some species of starfish can intentionally detach an arm from which a whole new starfish will grow.

Barnes is having great fun in Ten Million Aliens, and he takes perverse pleasure in lulling readers into a false sense of Kumbaya. He tells us of the cleaner fish and the dance they do to "advertise their services" to much larger fish. The larger fish appreciates the service performed by the cleaner fish. When the cleaner fish's job is complete they both swim happily away. Then he tells you of something called a sabre-toothed blenny. It looks like a cleaner fish -- it even dances like a cleaner fish. The big fish thinks "Oh look! Bath time." Then the sabre-toothed blenny takes a big bite of big fish flesh and takes off. Peaceable Kingdom, indeed.

Fact: The aardvark is a singularity: the only member of its genus, family, and order. (We aren't unique -- there are more than 300 species of primates -- but aardvarks are.)

Barnes indulges in joyous tangents, bad puns, and free-association (riffing on Blake and flatworms), and then he patiently explains revisionist taxonomy. I confess to my mind wandering after too many worms -- especially giant parasitic worms. A few of the micro-micro essays strike me as extraneous but then how much can you really say about placozoan? The organization of the essays jumps back and forth rather a lot -- just as you're getting into a fascinating platypus the author returns to worms. He enjoys giving the blue to creationists and Richard Dawkins, alike. Barnes does have intermittent fits of rambling but I am willing to forgive this on the basis that it is great fun to watch his brain work.

Fact: The longest animal is a ribbon worm: 177 feet.

The answer to the classic question is art imitates life, and quite poorly -- what puny imaginations we have compared with necessity. I highly recommend Ten Million Aliens. It is a book for picnics and treehouses and diving platforms in the middle of lakes; also good to read to children at bedtime. You'll be charmed by the writing and enchanted by the elegance of the world around you. I'll close with a word from the author: "In this book I have constantly stressed the human continuity with our fellow species: and if there is a moral to be drawn from the continuity, it is to do with respect, compassion and generosity, and even love."

Fact: The blue whale has a tongue the size of an elephant.

Review originally published by Bookslut.
Posted by Texas Book Lover at 7:00 AM