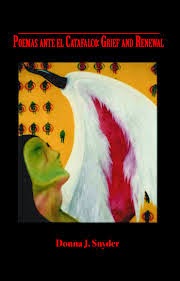 We're kicking off National Poetry Month here at Texas Book Lover with El Paso poet Donna J. Snyder's Poemas Ante El Catafalco: Grief and Renewal. This collection was born of Snyder's healing process following the deaths of several individuals who were very close to her, including her father and her husband. Poemas is divided into two parts, Grief and Renewal, which allow us the privilege of experiencing a small part of her very personal journey.

Poemas begins with grief of loss. As Snyder writes in "The day the artist died," (in memory of her husband, the artist Marío Colín):


How will She love herself
without his devotion?

And that's the crux of the problem, yes? How to continue without. Snyder writes in the preface that the unexpected death of her husband triggered renewed grief over her father's death. This is from "Feather of death" (in memory of Roy K. Snyder):

Personal loss also prompted Snyder to write about loss on a larger scale: so-called acts of God (or Mother Nature - pick your poison), political turmoil, environmental degradation, the endless exploitation of the border and its inhabitants, and "...the meaningless abyss of a zero sum game." "The Sunday news," "A wave of a thousand bodies" and "A neon desert the only sea" are particularly powerful examples of loss writ global.

As you'd expect, many of the poems in Part One are elegies and laments. But moving into Part Two the forms begin to expand, like the poet herself as she begins to heal. From "Comfort":


I have on sturdy shoes and good cotton socks.
I find comfort in the memory of your voice.
I see you along every path.
Your presence comes upon me like balm.

Memory slowly transforms from a source of pain to a source of joy and can be celebrated again. This is from "We got married on Día de los Muertos":


We got married on Día de los Muertos,
followed the marigold path backwards,
holding hands & running toward ghosts
we'd always tried to flee.
...
We clung to each other like tattoos,
calaveras dancing in wedding clothes.

Until finally Snyder is strong enough again to offer some wisdom to the rest of us in "Prepare to ululate":


Stare the beast in the face, there in the mirror.
...let
the mirth grow into a cackle.
Cast the spell.
Use ALL CAPS for emphasis.

The subtle grace of the crone
at the core of the principle of beauty.
...
Prepare to ululate.