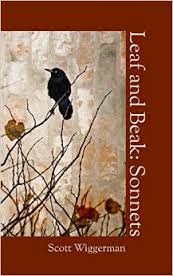 Leaf and Beak: Sonnets is the third poetry collection from Scott Wiggerman. Taking inspiration from daily constitutionals around and about his Austin, Texas neighborhood and Mueller Lake Park (where “the glistening silks of morning meadows speak / in praise of spiders”), this collection chronicles a year of closely observed seasons and urban wildlife and I am reminded of Robert Frost and James Audubon. What a relief and refreshingly free of irony – classical, lyrical, romantic sonnets.

In winter when the forecast calls for rare snow, the poet observes “I’ll have to bundle pipes like winter tykes” and comments on the giddy television meteorologists: “It’s not their fault: / they love the change of pace from what’s to come, / when any fool can forecast heat and sun.”

Come “An Early Spring” and Austin erupts into riotous celebration: “and overnight the mountain laurels’ fizz / of grapes appeared, the park in drunken grins. / Another week and dogwood whites unfurled / like laundry on a line, the kernels burst”.

On a sizzling summer day, the “Renewal” of a tent of willows: “like churches filled with incense, not a lick / of air. A holiness pervades this space / as light sifts through the canopy, a trick / of flowers, pods, and limbs enmeshed, a place / of grace and beauty.”

Extolling the charms of November in “In Praise of Gray”: “I look into the fog, the idle trees, / the lake, its smoky lens – and not a hint / of movement. Washed-out colors are not lies, / nor mournful, nor uncertain. Love this day / for what it is, and praise the gods of gray.”

Many of these sonnets, given the recent drought in Texas, are a combination of appreciation and lament, often with a dry humor. “It’s good to know that some things dote on sun / but so does melanoma” followed by “but catch a whiff of fountain’s fishy spray, / a tiny solace. Languid sluggishness / prevails: it’s Houston-humid, Brownsville-hot.”

I found myself comforted by this beautiful, traditional poetic form and figurative language, especially in the first section where each poem is connected to the next by the repetition of the last line of the previous poem in the first line of the next. The first poem in this section ends with “Resign / yourself to heat, aware the trees deceive -  / implore the skies for rain, a small reprieve.” The next begins “Implore the skies for rain, a small reprieve, / a steady shower, not a strong barrage”.

I’m going to close this review and the last day of National Poetry Month 2015 with my favorite Leaf and Beak sonnet.

He’s offered glimpses, but today he stands
in all his glory – steely blue, a tinge
of silver, rather like a knife – the pond’s
reflection sharp and clear, but also strange:
that neck, a twisted metal plumber’s snake
more suited to a sink; those thin gray pipes
called legs; attached by tiny nuts that mock
a heavy plumage; last, the tuft that ropes
atop his head, a quirky ornament.

An odd array of parts, this bird, now seen
away from camouflage of trees, the tent
of grayish bark he blends with well, as when
pondwaters ripple and reflections skew
the thing we think we know, now shown anew.
Posted by Texas Book Lover at 7:00 AM