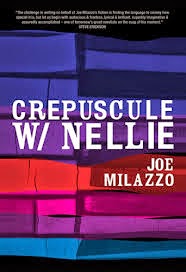 
"When other helpers fail and comforts flee, help of the helpless, oh, abide with me. Point me to the skies, earth's vain shadows flee. I'll triumph still, if only you'll abide with me."

I know I need to try to stay away from music metaphors to describe Crepuscule W/ Nellie by Joe Milazzo but I'm going to begin by saying that this novel is a sumptuous symphonic language feast. Yep—truly. You will be dizzyingly drunk, happily drowning in the stuff. Multiple first-person narratives will subsume you in the characters and the effect will make you feel as if you are there, as if you are them.

Crepuscule W/ Nellie is not an easy read. Minimally but imaginatively threaded together out of phone calls, cartons of folders, film negatives, recording masters, conversations, and free associations, the conceit is original and intriguing and aggressively nontraditional, though I'm not sure I'm prepared to crown, or consign it as experimental. There is nothing approximating what we would typically recognize as plot in this work. I would call this pure intention, instead—the author's variation (there I go again) on the little understood but much talked about life of an artist. Jazz lovers will be familiar with Thelonious Monk's composition for jazz piano by the same name, a love offering to his wife, Nellie. Monk lovers will also be familiar with another of his compositions titled "Pannonica," so called for the Baroness Pannonica ("Nica") de Koenigswarter, his patron of many decades. Is this second song also a love offering? Plato or Eros? That is a question but not the question and not the point of Crepuscule W/ Nellie. The point is that you cannot—cannot—completely know another individual so love necessarily entails a leap of faith. And that's okay.

I came to Milazzo's novel with no previous knowledge of Monk beyond his music. As the author notes, little personal information about Monk has been known until very recently in a small, sudden spate of material in the form of biographies and a couple of documentary films. I can confirm this as I tried to find historical facts for this review. As little as is known about Monk and Nica, even less is known about Nellie. Clichés are unworthy of Nellie Smith Monk but she is the glue. I found her to be the most fascinating character in this collection of character studies. She is level when Monk is unbalanced and Nica is swooning and Frank, the Baroness's "most loyal valet," is crooked. Nellie was no victim of this jazz trio; she chose. Addressing her husband as "Melodious Thunk," she understood that "Monk had made her crave [. . .] the right she could do in being right by him [. . .] If he was ever going to give her a reason why not to love him, it would be because he was Monk. Not because the Monk she knew was a deception. It would be because she had changed." Nellie is underestimated, as she says to Nica, "You have some purpose [. . .] in thinking that I should be exceptional but elect not to be. Or have forgotten how to be. Or take for granted that no Nellie could ever be."

But when the confrontation comes between Monk and Nellie it's not about Nica and the pain is extraordinarily deep.

Nica is, Nica is . . . Yes, well. When the confrontation comes between Monk and Nica it is a betrayal, but not by either party, and the ensuing conversation is the funniest passage in a book that doesn't have much in the way of humor (although it is suffused with authorial good humor toward these characters).

Monk "is off to one side, straddling the piano bench almost as if it were a teeter-totter and he were, so his hunching suggests, simply waiting for a denser partner to oppose him." And not just physically. "T.S. [Monk] was no Rubinstein, no Horowitz. No grave leonine head. No tails. Fallen socks. Nothing Listzian in his conception. No tincture of Rachmaninoff. T.S., he seemed to have been plucked free of memory, plucked free of those long roots that so love to clump and snare." Monk is "Scrupulous dishevelment, not the Joker in the pack, not as first impressions might lead you to believe, but the Knave of Diamonds."

Now let's talk about that lavish language. One of the blurbs on the back of the book calls Milazzo's prose "maximalist." That's the perfect term—why say anything in three words if you can use twenty-three? This is almost always a death knell, but in Crepuscule W/Nellie it works.

This is Frank, describing the Baroness's mansion:

This home's considerable inner is a presence more outer. One trusts that one has not misspoken, but, yes, it does emerge, baseboards and cornices, sconces, moldings and mantles, alcoves undisclosing like the hoods of cloaks, the rooms of this house spreading out their ampleness as if laying a table setting over the whole of the property.

Milazzo riffing (sorry!) on the nature of interruptions:

This is John (Coltrane, I suspect) taking in the action at a pawn shop: "The wriggling and humiliation of having to bid for the pleasure of having some avaricious guido revise your notions of value while need crawled up your calf, then your thigh, wrapped its feelers around your vertebrae."

See what I mean?

This book requires patience and I will not claim that mine did not periodically fall short of the mark. There are a couple of characters, John and Bean, whose narratives don't add to the overall work except to allow Milazzo to spin more gorgeous language. There is a fantastical caper hatched by Nica and Frank that is so outlandish that it seems to belong in a different narrative; it does make your eyes pop out and your mouth drop open.

In an afterword, Milazzo explains, "Although some, though not all, of the characters in the novel have been derived from and named after actual historical personages, the events reported and the relationships explored here are almost entirely invented." He christens this a work of "speculative historical fiction." I don't know what to call it but I can go along with that. Crepuscule W/ Nellie is a book you would do well to read twice. At least. It is frustrating, brilliant, challenging, and ultimately rewarding, much like Thelonious Sphere Monk himself: "Not the facts. The truth."

Originally published in The Collagist
Posted by Texas Book Lover at 9:07 AM