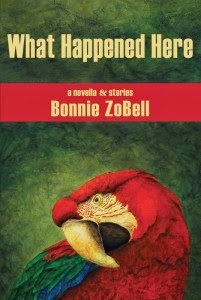 
In 1978, a Pacific Southwest Airlines jet and a Cessna collided in the air over the North Park neighborhood of San Diego. It remains the deadliest accident in California aviation history.

“A few neighbors who happened to look up when they heard a loud crunching sound saw the out-of-control jet … fire and smoke shooting out from behind before the plane slammed into the earth at 300 miles per hour… The explosion was instantaneous – an enormous fireball whooshed into the sky, a mushroom of smoke and debris. Scraps of clothing leaped onto telephone poles, body parts fell on roofs, tray tables scattered across driveways. Airplane seats landed on front lawns, arms and legs descended onto patios, and a torso fell through the windshield of a moving vehicle.”

What Happened Here, Bonnie ZoBell’s second book, is comprised of one novella and ten short stories linked by this tragedy. Each of the stories in this volume, with the exception of the eponymous novella, has been previously published in various magazines. “Uncle Rempt” was nominated for the Million Writers Award; “Rocks” was nominated for a Pushcart Prize; and “This Time of Night” earned ZoBell a National Endowment for the Arts Fellowship.

The North Park neighborhood is not the San Diego of Mission Beach or La Jolla. The characters that people ZoBell’s stories are receptionists, tow-truck drivers, waitresses and shopkeepers – ordinary, average guys and gals in the tradition of Carver, Munro and Dubus. The difference is that the characters in those authors’ stories are (usually) undiagnosed. Almost everyone in ZoBell’s stories suffers from a (usually) diagnosed mental illness of various sorts and to varying degrees—some swallow antidepressants and carry on while others end up in a locked ward. I hadn’t seen the links to this neighborhood as being integral to these stories until I began wondering about the possibility of the neighborhood being haunted by the tragedy that happened there, wondering if bad vibes could infect hearts and minds.

ZoBell’s prose is clear and simple—you won’t find SAT vocab words here—and it suits the characters and the neighborhood. Accordingly, this style offers up metaphors that are uncomplicated but effective. The landscaping includes “Dr. Seussian succulents.” Tiny has “…a smile as long as the highway out of a dry town in Utah.” Tires spin so that “…gravel shot out behind them like ammunition.” A woman in a laundry mat has “…generations of clothes to fold.”

Humor is measured, appropriate to the tenor of these tales. John discussing his therapist: “He wants me to get enraged, but not too enraged. Reasonably enraged.” Heather has “…dyed the tips of the rest of it [her hair] mauve in anticipation of switching to the art department.” Sean has “…spent four years getting A’s in classes he didn’t like for a degree he wasn’t sure was his idea and has ended up with a girlfriend who wants to buy matching dinnerware.” Willy, dying from AIDS, tells Annie, “I wish I was going to see you in bifocals and stretch pants and with Kleenex tucked in your watchband.”

What Happened Here is a collection of low-key, slice-of-life stories that are neighbors to each other in the same way that the characters in them are neighbors. They share a common space and are dependent upon each other yet still resonate with the basic human yearning for freedom—freedom from fear; from expectations that are too high and expectations that are too low; from the covenants of HOAs; from the pressure to conform—the shoulds, mustn’ts, and can’ts; from the past; from the limitations of a failing body; from the pain of compromising your talent for the necessity of filthy lucre; from tradition; from hate and, yes, from love. Who among us doesn’t identify with that yearning?

Originally published in Monkeybicycle.
Posted by Texas Book Lover at 7:00 AM