#ThrowbackThursday: My review of "Mother, Mother" by Koren Zailckas, her first novel (Sept 2013) 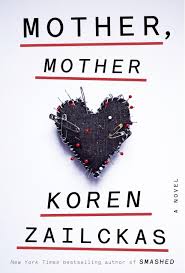 "She's the kind of woman who lives for others - you can tell the others by their hunted expression." - C.S. Lewis

She, Josephine Hurst, lives for others in that she's a narcissist and sees the self as something reflected back at her by the hunted, in this case, her family: husband Douglas, daughters Rose and Violet, and son William. If the hunted didn't exist, neither would Josephine. There's no "there" there.

Definition:
nar·cis·sist [nahr-suh-sist], noun: a person who is overly self-involved, and often vain and selfish - Dictionary.com

Mother, Mother begins with the morning after the evening that sent Violet (16) to a locked psyche ward and William (12) to the emergency room. Violet is sixteen and rebelling in all the ways a teenager should; it's not her fault that she has more to rebel against than most teens. Bad-trippin' on morning glory seed tea, Violet cannot reliably recall what did or did not go down last night. All she knows is that she's wearing hospital pajamas with no drawstring and people keep asking her why she wanted to hurt her little brother. William is twelve and recently diagnosed with Aspergers and "comorbid epilepsy." Does twelve seem a little late in life to get an autism spectrum diagnosis? No matter, back to that later. William, with stitches in his chin and a splint on his right hand, had a seizure in the middle of the third act and the attendant blackout renders his memory, well, absent. He doesn't have one. Rose (20, sort of) wasn't around (at least, we don't think she was, though Violet claimed to have seen her in the foyer) because she walked out the door a year ago and hasn't been seen or heard from since. Douglas was physically present that night, however he is a recovering alcoholic who chose this particular night for a relapse. He suffers a blackout, so his memory, too, is unreliable when it works at all. Conveniently, this leaves Josephine as the only witness but she is the narcissist referenced above. So what the hell happened that night and how did they all get to this place?

Mother, Mother is about the search for truth and how slippery that can be. Is there such a thing as absolute, verifiable truth? Or does truth morph with perspective? Is there a single true story about any particular set of facts that everyone could get behind and say: "Yep, that's what happened. And this is how and why it happened." Or is truth subject to personality, character, will, disease and psychedelic substances? I am reminded of one of my favorite lines: "This was bullshit in Russian-nesting-dolls form,..." In other words, lies wrapped in fabrications, nestled in deceptions, surrounded by distortions, and finally jammed inside mendacity so insidious and pervasive as to be, in a word, evil. Warning: that's not hyperbole. Josephine takes Munchhausen's-by-proxy to extremes never before seen, all without raising her hand to anyone. Josephine recognizes no boundaries, physical or psychological. Do you see?

Koren Zailckas's first book is the internationally best-selling memoir Smashed. This is the author's first work of fiction. As such, it is remarkable. The characters are fully realized and consistent. They stay firmly in character, especially when you wish they wouldn't. There is a dangerous imbalance here, a hall-of-mirrors, fun house atmosphere, developed gradually, organically engendering confusion, shock, disgust, and finally horror, in the reader. There is no hyperbole here; it's not necessary. The plot begins with a kind of hazy, unfocused quality that reflects the shaky memories of what happened that night. As the plot thickens, the pacing (almost imperceptibly at first) begins to build momentum until it is relentless, like a flood or an avalanche. The author knows exactly when to add the eye of newt and toe of frog to the brew. Bring on the toil and trouble. The climax is a twisted surprise, as it should be, and the resolution satisfying.

My only problem with this book is the last couple of chapters. Someone should have combined them and titled it "Afterward." Reminds me of the afterthought tacked onto the end of Harry Potter and the Deathly Hallows, both graceless and gratuitous. For some reason Zailckas, or perhaps an editor, found it necessary to wrap up the future in a bow and present it to the reader. It is unfortunate that the single misstep in the entire work occurs at the end and as such is your last impression. But never fear, that last impression is not the lasting impression of Mother, Mother.

Your exhausted brain and heart will skip right over the end when you remember this novel. What you will remember is how the characters became full-fledged individuals and how you empathized with Douglas's struggle for sobriety, authority and relevance in his own family. You'll remember the determination of Violet as she pulls herself back from the brink and discovers a will to the future and the strength to save what is left of her family. You'll remember Will's utter dependence on his mother and what it costs him emotionally for the rest of his life. I think it's entirely possible, in fact highly probable, that if there were a sequel to Mother, Mother (please DON'T), Will would turn out to be the monster to Josephine's Frankenstein. See page 330 for all the proof you'd need of my theory. Um...you won't remember much about Rose. And you will never forget Josephine: the bad, the worse and the bat-shit crazy. As Violet noted, sometimes it is better to be hated than to be ignored, especially by someone you love. After all, if you are hated you still exist.
Posted by Texas Book Lover at 7:00 AM