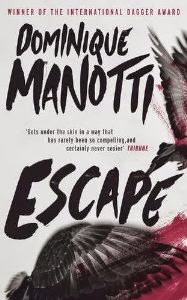 Escape by Dominique Manotti is part political treatise, part love story, part sly send-up of cowardly corporate cynicism, and part cultural commentary on the isolation of the individual, masquerading as a crime thriller. The story is born of the “Republic of Salò” where Mussolini attempted to establish the Republican Fascist Party as his army was driven from Rome. These politics have poisoned the region since 1943. Manotti has written: “To understand Italy, one has to remember the immense and profound support for Mussolini and the proximity of the War to the events in this book. Fascism had only been defeated for twenty-five years in 1968, leaving numerous live fascist cells behind. ”

Escape begins with the prison break of Carlo Fedeli, a political prisoner and charismatic former leader of the Red Brigades, and his cellmate Filippo, an uneducated hood from the streets of Rome. Filippo’s naïve fantasies of two comrades-against-the-world are dashed when Carlo is met by a getaway car and refuses to take Filippo with him. Instead Carlo hands him a pack with a change of clothes, a couple of sandwiches, a little money, and a name: Lisa Biaggi, Carlo’s girlfriend and a political refugee living in Paris.

A few weeks later Lisa buys an Italian newspaper to learn that Carlo has been killed by the police in an attempted bank robbery. Convinced that Carlo was set up and assassinated, Lisa is suspicious of Filippo when he shows up at her door. Filippo is inspired by the newspaper accounts of Carlo’s death and spends his nights writing. Before long he has a manuscript. When that manuscript is published as Escape, the story of two best friends who break out of prison and go on to rob a bank that results in the death of one and the flight of the other to France, he becomes a sensation. Filippo coyly maintains that yes, he knew Carlo, but everything after the prison break is simply a novel. Wink, wink, nudge. As the publicist with Filippo’s new publishing house tells him:

Let me be clear. If you’re possibly a cop-killer, that makes you an attractive young hoodlum. But if you are a declared cop-killer and proud of it, then you become a criminal no one wants to be associated with. It’s a delicate balance. We have to maintain the ambiguity without putting you directly in danger. “It’s a novel, talk to my lawyer.”

Filippo’s novel turns out to be critically-acclaimed and a popular hit. Lisa cannot abide Carlo being remembered as a petty criminal and launches an amateur investigation of her own, thereby inadvertently alerting the Italian government. It appears that the Italians will demand Filippo’s arrest and extradition – if he lives that long.

“Years of Lead” is the moniker given to a period of political strife and violence in Italy in reaction to the 1969 Piazza Fontana bombing in Milan that killed seventeen and wounded ninety. It was followed by terrorism that extended well into the 1980s when a bomb exploded on the Florence-Bologna train line. It wasn’t until 2014 that secret files on these events were declassified and confirmed the involvement of Ordine Nuovo and the Armed Revolutionary Nucleo, fascist organizations whose aims were to destroy the Left and cause extreme fear in the population. Translator Amanda Hopkinson writes in the afterword to Escape: “Revealed are the lengths to which the state will go to create a ‘strategy of tension’ to sow disorder, resulting in popular demand for imposed order. … Is Escape, written two years before these disclosures, a case of fiction anticipating political disclosure of historical fact?”
Posted by Texas Book Lover at 7:00 AM