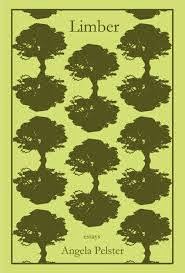 The first line of Limber is "It is still winter." Indeed. This is the wintriest spring I can remember in west Texas. Persephone is lingering in the warmth. But I digress.

Limber is Angela Pelster's debut collection of seventeen heedful and often elegiac essays, meditations at the juncture of the natural world and language. I made a point of reading this slim volume outside, under an elderly just-budding mesquite tree. Some will deride this tree as not a tree but a large shrub. It's what we have. The author has many more and larger trees: poplar, redwood, mango, mountain ash, acacia, and the eponymous limber pine, among others.

There is the Burmis Tree, a local landmark in Burmis, Alberta, Canada, a limber pine, so named "...for the ways they bend in the harsh winds and grow in curves around it; they slither their roots along rock faces until they find cracks they can slip into and drink from." There is the Tree That Owns Itself, a white oak, in Athens, Georgia, that the purported owner loved so much that he deeded the tree and the land surrounding it to it. There are the Moon Trees, sprouted from seeds that orbited the moon with astronaut Stuart Roosa of Apollo 14 fame. There is L'Arbre du Ténéré (The Loneliest Tree in the World), an acacia, the only tree for 250 miles in the Sahara, northern Niger. My favorite essay is "How Trees Came to Be in the World" (pg 135). I don't think I've read a more accessible account of evolution anywhere, truly.

I enjoyed this collection, although I was confused by a few of the essays that either don't seem to fit even the broad theme or are so nebulous as to seem to be about, well, what exactly? Maybe these essays do belong in this particular collection and I'm not seeing the connection. Believe me, that's entirely possible. Now that's out of the way and we can focus on the good stuff. Pelster does not romanticize nature, which is refreshing and a relief. Romanticizing shouldn't be necessary. She is angry when anger is called for, magnanimous when capable, always empathetic. Pelster's gift of description is powerfully evocative. On the collapse of a mountain from decades of mining blasts: "The falling rock created a sucking wind. It inhaled the mud of the river bottom with a gulp and spit a wave of violence before it." On the humidity in a redwood forest in northern California: "...the air was so wet you could suck the rain from it with your lips." A metaphysical observation in the same forest:


The signs also said that the tallest tree in the world is a redwood in California. It was the land of giants, I thought, and difficult to know where the myth began and the truth ended. Ask a poplar if it believes in redwoods and it might start talking about faith.

When the Burmis Tree finally gave up the ghost to rot it was propped up again with steel and chains. When the Tree That Owns Itself succumbed to a storm the Son of the Tree That Owns Itself, grown from an acorn, replaced it. When the Loneliest Tree in the World was mowed down by a drunken truck driver the trunk and limbs were glued back together and placed on display. Our willful illusions will not suffice. We cannot leave well enough alone.

A tree ring marks a year of growth, but it isn't marking it for humans. The rings are a memory of what the seasons brought and what the tree made of it. The widest rings are the good years, recorded in thick dark circles of brown, and the hungry years are narrow and pale and hard to read.

After the countless blows inflicted to the body of our mother, what story will the trees tell about us?

Angela Pelster’s essays have appeared in Granta, The Gettysburg Review, Seneca Review, The Globe and Mail,Relief Magazine and others. Her children’s novel The Curious Adventures of India Sophia won the Golden Eagle Children’s Choice award in 2006. She lives with her family in Baltimore and teaches at Towson University.

National Arbor Day is April 25th. Click here to find out what you can do.

Limber arrived with a thoughtful gesture: a seed-embedded leaflet that you can plant and flowers will grow. I'm gonna go do that now. My mesquite needs company.
Posted by Texas Book Lover at 10:10 AM