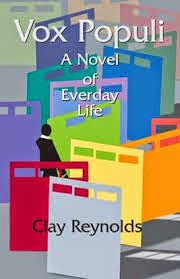 Vox Populi is the fifteenth book from Clay Reynolds, professor and Director of Creative Writing at the University of Texas - Dallas, and claims  - right there on the cover - to be a novel. Before Vox properly begins, there is a preface from  the author discussing the definition of a novel, in which Reynolds reports that the British novelist Paul Scott told him that the only definition of a novel that made sense to him was "a large collection of consecutively numbered pages, each containing a volume of words, bound on one side and open on the other three and generally contained by a cover." Vox is best described as a series of character studies - or situation studies - including the study of our nameless narrator who interacts with each of these characters during the course of Everyday Life.

The narrator encounters these people at the grocery store, jury duty, the car wash, the barbershop, the tax office and on the golf course, among many other everyday locales. These people are sometimes lonely or anxious or fearful; sometimes they're oblivious and arrogant and unreliable; mostly they're just trying to do their best to get through the events of any given day. They (we) are mechanics, housewives, teachers, waitresses, military servicemen and shopkeepers. There is the older, well-off white man who checks every box of privilege this country has to offer, who has never been failed or suspected by law enforcement, who must contend with the uncomfortable conclusion that the young day laborer he sits next to at jury duty knows more about how the world functions than he does.

There is the middle-aged, carefully coiffed, sensibly dressed, middle management-type woman at the car wash who has a run-in with a chihuahua belonging to a Paris Hilton wannabe. This scene would come off as just another minor annoyance in the larger scheme of things except for three words. The woman's shoes are ruined and she turns to the narrator. "I have an appointment." She looks up at me, tears welling in her eyes. "It's an interview." I don't know how the author has done it but in those three words I felt how all of this woman's hopes for her future were pinned on this interview, that unemployment was threatening her world, and that she had always believed that if you played by the rules and worked hard then all good things would be yours. She has been betrayed by the supreme indifference of the cosmos. All of that in three little words.

There is the woman who has charged into the tax office to appeal the assessment on her property who indulges herself in a pantomime of commiseration that regularly insults the couple she is pretending to listen to. This woman is so oblivious to her surroundings that she spends the time loudly complaining of the general incompetence of her Latino gardeners and maids but fails to register that the airman in fatigues who is sharing the waiting room with her is Latino. Then she tells him, "I want you to know...I support the troops." It is a nauseating, simpering display by a woman who possesses so little self-awareness that she will never understand how offensive she is. I know every one of these people; so do you.

Clay Reynolds is uncannily skilled at rendering vignettes of strangers forced to occupy the same physical space. He is an astute observer of our smallest gestures and expressions and his dialogue is spot-on, complete with malapropisms that had me laughing aloud. His physical descriptions are detailed to an impressive degree. I could picture these people standing in front of me, to the last vivid detail. At the beginning of Vox, the nameless but not-quite-anonymous narrator seems to be a rather dull blank slate with no personality of his own and at the mercy of the seemingly stronger personalities surrounding him. As the sketches progress, though, our narrator begins to slowly but surely engage more substantively, confidently and empathetically - which is to say, successfully. It is a subtle performance.

If you prefer books that have a plot and include action to any degree then you will want to pass on Vox. Ole Willie wrote that all the world's a stage and we are merely players. We are also, basically, ambulatory sounding boards - mirrors - whose purpose is to reflect others back at themselves. Each of us would necessarily have a unique filter interfering with that reflection. Do we choose companions based on the self we prefer to see reflected back at us? If so, does that preference change over time? Do our filters change as well?  If these are the sort of questions you could spend an afternoon pondering, if you appreciate a great writing exercise, if you are fascinated by the human zoo, then you will enjoy Vox Populi.

I'm going to close with a quote from "Neighbors."

Even though it seems that many of my observations about this benighted family are tinged with an odd combination of approbation and disgust, I have absolutely no problem living next door to them. On the whole, they're solicitous and cause me no direct problems. I've had worse neighbors in my time, and for all their oddity, they pose no threat to my welfare, health or happiness.

That strikes me as a pretty good litmus test for neighbors, friends and family. It is so easy to be kind to each other. Why are we so bad at it?
Posted by Texas Book Lover at 7:00 AM