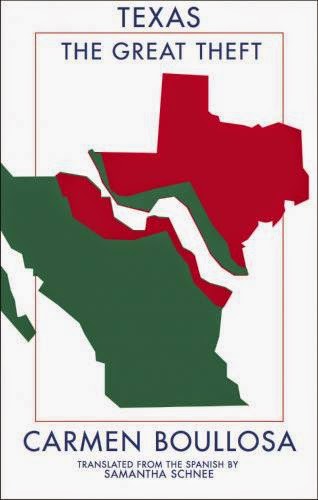 
Once upon a time in Texas, there was a man perturbed, even aghast, by the rarity of contemporary translations of literature in this country. Thus was born Deep Vellum Publishing. Deep Vellum, based in Dallas, released its first title today. Woo hoo! Congratulations all around. And what a debut it is: Texas: the Great Theft by Carmen Boullosa, translated from the Spanish by Texan Samantha Schnee of Words Without Borders fame. Her translation from the Spanish is inspired: chatty, cleverly colloquial and full of energy.

One day in 1859 in the Texas town of Bruneville (aka Brownsville), Don Nepomuceno witnesses the local sheriff pistol-whipping a drunken vaquero in the town square. When Nepomuceno confronts the sheriff, the sheriff insults him, “Shut up, you dirty greaser.” The news of this insult spreads rapidly along both banks of the Rio Grande/Bravo via what resembles a giant game of telephone, assisted by messenger pigeon and lightning bolt. The town is of two minds about this. On the one hand, “How could a puffed up carpenter dare speak that way to Don Nepomuceno, Doña Estefanía’s son, the grandson and great-grandson of the owners of more than a thousand acres, including those on which Bruneville sits?!” And on the other hand, “Nepomuceno, that no-good, goddamned, cattle-thieving, red-headed bandit, he can rot in hell for all I care!” Shots ring out. The sheriff is wounded and Nepomuceno, taking the old vaquero with him, escapes across the river to Matasánchez, Mexico (aka Matamoros) where he proceeds to make plans for an invasion of Texas.

Boullosa has taken an incident from the fraught and bloody history of Texan/Mexican/American relations and woven a generous tale full of magic and the all-too-human, reminiscent of Revolt by Qaisra Sharaz and John Nichols’ The Milagro Beanfield War. The cast of characters in the two towns are a motley and varied crew, representative of the actual historical residents of the region (I swear – look it up): Mexicans, Texans, Native Americans, socialist Germans, escaped slaves, a commune of a dozen Amazons (yes, you read that correctly), Cubans, Russians, Irishmen, ghosts, espionage agents, agents provocateurs, mystics and one philosopher-baker.

Texas is a delight, packed with sly wit, word-play and sharp observation. The omniscient narrator regularly addresses the reader directly, as actors will address the camera and speak to the audience, poking a sharp stick at absurdity with a deadpan delivery that had me laughing aloud. For instance, when describing the locals, "…two madmen (Connecticut, who only says “I’m from Connecticut,” and the Scot, who says lots but in his country’s strange accent it’s impossible to understand, which is just as well, because his babbling is full of obscenities),…" And this, "Jones never stops for Father Vera, he’s not stupid and he knows that the priest dislikes him and thinks he’s a heretic because he’s read the whole Bible from cover to cover several times (proof to the priest that Jones is a damned Protestant)."

There are doses of the magic realism for which Mexican literature is famous. For instance, the local mystic is hailed by a fence post:

“Psst, Iluminado!”
El Iluminado thinks the voice is coming from the ruined fence…
“I’m going to help you. Make me your cross and I will speak the Word to all.”
The voice is sharp and childish, no one would believe it’s coming from this old piece of wood.
Without asking anyone’s permission El Iluminado yanks up the talking board…
“That’s right! Well done! Now nail the board next to me, crosswise.”
“What nails should I use?”
“We’re going to get some at the store.”
“I don’t have any money, and Señor Bartolo doesn’t give credit.”
“I’ll talk to him. Let’s go!”

The results of the talking cross? “The line that beggars and believers have formed to bless themselves with the holy water where the (miraculous) Talking Cross was dunked snakes all the way to the Town Hall.”
Boullosa is also skilled at the quirkily pastoral, “Although it’s nearly settled, they won’t announce it until dawn, after a nightlong vigil discussing the matter in darkness, to the hooting of owls, the dreaming of foxes, the nighttime wiggling of fish.” She infuses even a description of the spies passing messages with her unique style, “In passing, they utter phrases to balconies that appear to be empty. In the confessionals, they confess sins that aren’t sins, and their confessors aren’t priests. The barber repeats them in the middle of conversations, like non sequiturs. Lovers say things that aren’t at all loving.”

Texas, despite the subject matter, is not a plot-driven thriller. It doesn’t move quickly – if you’re looking for a lot of battle action then you should look elsewhere. What Texas has are characters and language; history that continues to impact Texas and Mexico that we might otherwise prefer to avoid; and an intelligent and stylish delivery that points out the abundant absurdities and hypocrisies. This book is to be savored, not gulped. Texas will reward your patience. Do not make the mistake of thinking this is all fun and games. I’ve dwelt on the humor and magic in this review because they are the unique and most impressive qualities. People die here and swing like strange fruit; people lose their land, homes, families, livelihoods and traditional ways of living and these sins haunt us still in news headlines daily.

I will leave you with a prophecy from the philosopher-baker:

“If we don’t get rid of them, before we know it they’ll pass a law preventing us from working on the other side of the Río Bravo…the worst is still to come. They’ll put up a fence or build a wall so we can’t cross over to ‘their’ Texas…and then, you’ll see, listen closely, they’ll take the water from our river, they’ll divert it for their own purposes,…there won’t be a single mustang or plot of land they don’t claim as theirs. South of the Río Bravo will become violent. Mexicans will begin to treat each other with the same contempt…Our women will be raped and butchered and buried in pieces in the desert.”