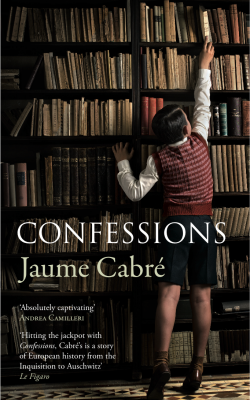 
The sole meaning of life is to serve humanity. - Leo Tolstoy

There isn’t a single organization that can protect itself from a grain of sand. – Michel Tournier

Confiteor. I cannot do it justice. Mea culpa. This work requires superlatives which don’t exist. Confessions by Jaume Cabré is the best argument I’ve ever encountered for the continuing necessity of a liberal arts education and also the best argument I’ve ever encountered for honoring the 10th commandment. It is a huge-hearted achievement: I laughed and cried; I was disgusted and delighted; I frequently spoke out loud to the characters, sometimes muttering and sometimes shouting. It is a good thing I live in the middle of nowhere – I might’ve alarmed an entire apartment block. ANYWAY, Confessions is the story of one man’s life and simultaneously a history of Europe, a history of ideas, an exposition on the nature of evil, an object lesson on the corrosive effects of envy, and an exploration of the character of beauty, as well as the consequences of obtaining it.

Confessions is written in the form of an epic letter from Adrià Ardevol to Sara Voltes-Epstein, the love of his life. From the Spanish Inquisition to the present day, Adrià attempts to explain his family’s history so that Sara may understand the decisions he has made, the decisions he was too cowardly to make, and that sometimes the sins of the odious father are visited, unfairly or no, upon the son. It is possible to view Adrià's final circumstances as poetic justice. Or not. And yes, I realize how cryptic that is, but if I say much more I’ll give it away: I’m striving for no spoilers. As Adrià notes early on, “It’s strange: there are so many things I want to explain to you and yet I keep getting distracted and wasting time with reflections that would make Freud drool. Perhaps it’s because my relationship with my father is to blame for everything. Perhaps because it was my fault he died.” There’s a teaser for you.

I was intrigued from the opening sentence, “It wasn’t until last night, walking along the wet streets of Vallcarca, that I finally comprehended that being born into my family had been an unforgivable mistake.” And then I was enchanted:

“Have you noticed that life is an inscrutable accident? Out of Father’s millions of spermatozoa, only one fertilizes the egg it reaches. That you were born; that I was born, those are vast random accidents. We could have been born millions of different beings who wouldn’t have been either you or me. That we both like Brahms is also a coincidence. That your family has had so many deaths and so few survivors. All random. If the itinerary of our genes and then our lives had shifted along another of the millions of possible forks in the road, none of this would have been written and who knows who would read it. It’s mind blowing.”

Confessions is intermittently horrifying. It is the bloody history of Europe, after all: the Inquisition, the Third Reich and Franco, to name a very few. I felt physically ill when the origins of the number Adrià’s father used for the combination lock on his office safe were casually revealed. But Confessions is often funny, too, with a sly, droll humor. There is a running joke throughout the work regarding the degree of flatness or roundness of the world, depending on the place and era. For instance, discussing a fire that was deliberately set and burned down a hardwood forest used for making instruments, “…in the Year of Our Lord 1690, when the world was round for almost everyone…” progressing to “The Year of Our Lord 1705…when the earth was increasingly round…” to approximately 1960 “…in those days when Franco ruled and the earth again became flat for us…”

Also running throughout the book are Black Eagle, the Valiant Arapaho Warrior Chief, and Sheriff Carson. Childhood toys consulted by an anxious Adrià during childhood, they pop up regularly during his adulthood to offer sage advice and timely warnings that are frequently hilarious in their understated manner. For instance, Adrià has just announced to his mother that he will no longer take violin lessons:

"That is my decision. You are going to have to put up with it,” I dared to say.
That was a declaration of war. But there was no other way I could do it. I left Father’s study without looking back.
"How." [Black Eagle]
"Yes?"
"You can start painting my face with war paint. Black and white from the mouth to the ears and two yellow stripes from top to bottom."
"Stop joking, I’m trembling."

Please don’t let that number – 751 pages – discourage you. Granted, Confessions develops slowly for the first 80 or so pages and it slows down again for the last 30 pages. But in between it sweeps you along and I was amazed at how quickly a hundred pages passed. It can be confusing in the beginning. The author shifts between first, second and third person narrative – pay attention to pronouns. The child Adrià will disassociate via third person when he becomes particularly anxious. In addition, the speaker of any given sentence will, without warning, not be the same speaker who finishes the sentence. Frequently the era in which a paragraph begins will shift several hundred years backward or forward in time before you finish reading that paragraph. For example, a sentence may begin with Adrià in Barcelona in 1968 and by the end of the sentence you’re listening to Lorenzo Storioni of Cremona and the year is 1764 or maybe you’re listening to Julià de Sau, a monk at Sant Pere del Burgal, and the year is 1380.

Adrià has taken advantage of creative license and invented scenes and dialogue from the distant past. He freely admits this: “Don’t look at me like that. I know I make things up: but I’m still telling the truth.” Once you understand that a scene being described from the past will abruptly become the present, you will  become accustomed to these segues and slip into the rhythm. If you get confused then you can always consult the Dramatis Personae at the back of the book. Oh, yeah – that reminds me: be prepared for Latin. And German. And French and Russian and Hebrew. You get the idea. Confessions is a novel for linguists and other lovers of language. Major kudos and possibly sainthood should go to translator Mara Faye Lethem.

Jaume Cabré is a playwright, essayist, and author of several novels that have sold more than a million copies throughout Europe. He has won several awards, among them the 42è Premi d'Honor de les Lletres Catalanes and the Creu de Sant Jordi. Confessions has won so many awards that I don’t have room to list them all so you may follow this link to read about them. Mara Faye Lethem is a literary translator of Catalan and Spanish. Her translations have appeared in The Best American Non-Required Reading 2010, The Paris Review and McSweeney’s.

Confessions is a sumptuous, gorgeous, ambitious, exasperating, disorienting, maddening, brilliant challenge and you must persevere. It is so worth the effort. I realize that I am just gushing here and critics aren't supposed to gush, I know, but this book is as close to perfect as it is possible for a book to be. Confessions has taken a spot in my Top 5.

Confiteor. Mea culpa.
Posted by Texas Book Lover at 7:00 AM