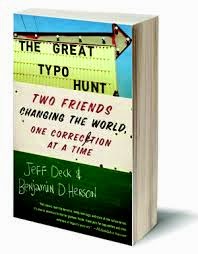 orthography    1.  The art or study of correct spelling according to established usage. 2. The aspect of language study concerned with letters and their sequences in words. 3. A method of representing a language or the sounds of language by written symbols; spelling.

I am nervous. I am about to review a book about typos and I will edit this thing within an inch of its life.

In 2008 Jeff Deck and Benjamin Herson formed the Typo Eradication Advancement League (TEAL) and set out to right a great wrong. A great many wrongs. They took off on a road trip, a mission to rescue the English language from dire abuse and neglect, and educate whoever happened to be standing around. They looked for typos, otherwise known as “the black hordes of error,” at each stop and always found what they were looking for. There were countless misspellings, apostrophe confusion, possessive problems, homophones and many more. But finding the typos was only the first step. Mr. Deck carried with him  a TEAL Kit, a plastic bag containing the tricks of his trade: markers, Sharpies, chalk, stick-on letters and Wite-Out.  He did not pack glass tubing for neon signs but who knew? The thing is, Jeff and Benjamin not only looked for typos, they also corrected them.

I have been supplied with my very own TEAL kit. Here is an example of my efforts. 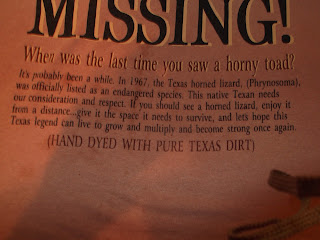 First off, everyone please agree to ignore the part about Texas dirt. OK. This is one of my t-shirts. I call your attention to the 4th line. “Lets” should be “let’s.” It’s missing an apostrophe. As a contraction of the words “let” and “us” it needs an apostrophe to stand in for the missing “u.” See?

And here is the corrected shirt. I have added an apostrophe as best I could with the black Sharpie in my TEAL kit. In this photograph it looks a little like a fly. 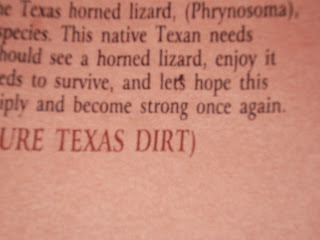 The authors made necessary corrections, both overt and covert, throughout the country. As you can imagine not everyone was receptive of our heroes and their mission.  Apathy ran amuck but some shopkeepers, restaurant managers, park rangers, store clerks, museum curators, etc., were friendly, if puzzled.  Some were mostly concerned about where the blame for the typo would be placed, certainly not on them. Others were openly hostile. And then there were the criminal charges. 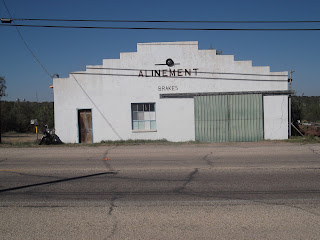 Here let me again offer an example of my efforts. I submit to you the following sign. “Alinement” is misspelled. It should read “Alignment.” I’ve seen this sign every day for years. It rankles. So I’m standing on the opposite side of the street with my camera when a man drove by. Then he backed up in the middle of the street and into the lot next to the building with the offending sign. He came loping across the street and demanded to know why I was taking pictures of his shop. Yep, the owner.  Good grief. So I had to explain what I was doing, about the typos and Jeff and Benjamin and my review, etc. So the guy finally says OK he was just wondering what I wanted with his shop. Then he said he had heard of the typo hunt. Kid you not.

The authors did wrestle with larger questions regarding their calling, lest you think this mere fun and games. How strictly do we enforce the rules? Should they be rules or more like guidelines? What about education? The authors visited elementary classrooms for inspiration. Should art be exempt from the rules? What part do idioms play? Should written language be stricter than spoken language? Should quarter be given?

I enjoyed this book so much. It encompassed two of my favorite things, language and road trips. Typos are my pet peeve and have been torturing me for years. I have raised three children whom I harassed about language all the time. I now  have two readers and one turncoat. This book has something for everyone: language, anthropology, sociology, geography, friendships, the open road and dark nights of the soul. I laughed out loud and learned some things too.

Our heroes are planning another road trip but have distilled their mission. Next time out they will EDIT. Which is what I’m going to do now.

Also, I didn’t know “smoothen” was a word.