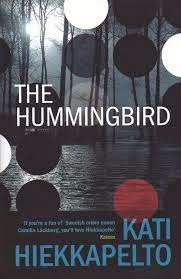 The Hummingbird is Finnish writer Kati Hiekkapelto’s debut novel, an entrant in the Scandinavian crime fiction genre which is so hot right now. Anna Fekete is a Hungarian immigrant to Finland and a brand new detective in the violent crimes unit. On her first day at her new job, a body is found on a jogging path, dead of a gunshot wound, with a strange medallion found in the pocket of her jacket. Before long another body is found on another jogging path, dead of a gunshot wound with the identical medallion in his pocket, and the hunt is on for a serial killer.

The Hummingbird piqued my interest on page one but didn’t deliver on that initial promise. Anna is a likable and complex character but I grew weary of reading about how tired she was. She’s stressed and homesick and depressed – I get it - but it made me tired. On the other hand, depression is monotonous so maybe it’s Hiekkapelto's way of viscerally conveying Anna's precarious state of mind. If the latter is the case then she succeeded  The details about the private lives of her colleagues proved superfluous to the story. Inserted at odd points, making for abrupt and clumsy segues, these details merely served to interrupt the flow of the narrative. Anna’s partner Esko, the one colleague that we need to know more about, isn’t given a back story at all and no details of his life outside the office are offered. This is unfortunate because their relationship is important and the evolution of that relationship develops in such a way that I was curious and wished I’d known more about him. The identity of the killer is a surprise, as it should be, but it is such a surprise because there are negligible clues to entice the reader, lead you on and reward your perseverance. The reader is denied that satisfaction and has no opportunities to grin and think, "Aha! That's a clue." We like to congratulate ourselves on our sleuthing abilities - this genre should be interactive. In addition, when the antagonist is revealed there is no back story and little to no explanation offered as to homicidal motivation. Serial killers do not kill randomly. This genre demands psychology. Otherwise the author seems to be offering up a killer at random.

Serial killers are well- and oft-trod ground and there needs to be an element that sets a story apart from so many others. In this case that element is immigration. Hiekkapelto is at her best when channeling the immigrant experience. “Anna…also knew from experience that it would be futile talking to Esko [her partner] and people like him about despair, fear, war, torture, oppression, discrimination, poverty and hunger, about how the world was full of people whose lives were a daily struggle against all of those terrible things.” The author’s empathy and understanding are affecting and I was truly moved. There is a subplot involving a young, Muslim immigrant girl and a case of suspected honor violence. She calls the Finnish equivalent of 911 to claim that her life is in danger. When the other detectives seemingly dismiss the case, Anna – having once been a young, Muslim immigrant girl – appoints herself the girl’s personal protector. This subplot meshes well with the main narrative, plays to Anna’s strengths, and the resolution is a pleasant surprise.

Hiekkapelto is also gifted at descriptive passages. Her characters are diverse and well-delineated. I could picture them in my mind’s eye as individuals. Her descriptive talent also applies to land- and cityscapes. A description of the ghetto new immigrants are consigned to: “The whole place was a forest built of dirty concrete, a thicket of trees as far as the eye could see, a place with trolls grunting on the pathways and creatures lurking in the corners, a place where the glimmer of a fairy tale shone only in the glazed eyes of the drug addicts.” And this: “Kids in baggy jeans were smoking something beneath the roof outside Bihar’s doorway, their presence challenging the shadows cast upon them like a life sentence by the surrounding buildings. Ducks caught in the oil, birds that nobody dressed in overalls is going to come and save.”

In stark contrast, this is the Finnish coastal forest in autumn: “When Anna had walked just over a kilometer, the path swung very close to the shoreline. The rush of iron-grey waves across the autumnal sea could be heard clearly. Anna looked out towards the sea. The wind whipped water into her eyes. If there had been flocks of sheep to clear the shrubs, as there had been centuries ago, she would have been able to see the shore, she thought. A white seagull braved the chilled air. Anna wondered how long it was planning on staying so far north. She gathered a handful of lingonberries and tasted the sweetness brought to them by the hoar frosts.”

As a debut, The Hummingbird is an acceptable first effort. In my opinion the problem has more to do with editing than with the concept, story or characters. There are a lot of adverbs and rarely did anyone just “say” anything; they screamed, cried, conferred, threatened, resolved, quipped, shrieked, exclaimed, cursed, bellowed, shouted and instructed. They even bleated. It seemed as if someone got carried away with a thesaurus. This is the sort of thing an editor is supposed to prevent. See Stephen King's On Writing for the best advice I've ever come across on this subject. There’s even a point where the third person narrative briefly jumps to first person before being yanked back into line. In sum, The Hummingbird was uneven. That said, there are complete characters, flashes of humor, evocative description and observant social commentary. A sequel is in the pipeline and there’s enough promise in this debut that I want to read the next installment before I make up my mind about Hiekkapelto. With practice and skillful editing she could be great. Stay tuned.
Posted by Texas Book Lover at 7:00 AM