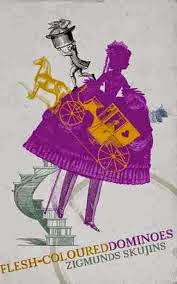 
The evolution of mankind depends on its ability to adapt to its own inventions. - Janis

Flesh-Coloured Dominoes by Latvia's Zigmunds Skujins is part surreal farce, part exploration of identity and what it means to possess a collective national identity. The chapters alternate between the eighteenth century misadventures of the Baltic German aristocracy and the Romanovs of Russia and the coming of age of our nameless narrator during the Second World War. Although the two narratives come together - more or less - in the end to answer some of those identity questions, I found the two halves difficult to reconcile.

After his parents disappear with the circus, our narrator is raised by his grandfather, a wise and generous man whose "...old-fashioned ways were tied to exacting precision, his wild imagination to deep-seated knowledge. It's possible his old-fashioned ways weren't really him being old-fashioned, but a display of his disdain for conformity." That disdain for conformity will come in handy - also dangerous - when the Nazis and then the Soviets arrive in Latvia and your identity, and how it is determined, literally means the difference between life and death. The questions of identity raised in this narrative produce a genetic and philosophical knot.

Meanwhile, in the next chapter, Giuseppe Balsamo, alias Count Cagliostro, alias the Great Cophta, is at the height of his occult influence over the European nobility of the late eighteenth century. One of those who falls under his spell is Baroness von Brigen whose husband has reportedly been killed in battle. When the Count, during a séance, tells her otherwise, "Where there were two, now there is one..." in some sort of Frankenstein's monster scenario, the Baroness goes in search of the half of her husband that still exists. Guess which half. The questions of identity raised here are more obvious.

There is much humor to enjoy in Dominoes. Describing a wedding: "There's a mob of clergymen in front of the altar. There's one Orthodox parish priest dressed in gold, like an icon, with a golden mitre on his head. And one Lutheran pastor like a black rooster in a muster of peacocks." On the occasion of our narrator's brother falling in love: "Little is known even now of the nature of love. ... The newest theories about falling in love explain it prosaically - through the effects of dopamine and noradrenaline on the brain's limbic system. ... He [his brother] changed beyond recognition and displayed signs of the limbic system in motion - a person grows wistful, their awareness of the surrounding world decreases, they become particularly stubborn." Skujins is also a master of metaphor. On the impact upon realization of profound truths: "What strange, unbelievable things can happen in a lifetime! Steel structures collapse, the voices of angels are heard between the panting of hate, the adder slinks away with the king's crown on its head, and a newly realised truth slides across your face like a breeze that barely stirs even your eyelashes." On trying to move on after the war ended: "The shadows of our memories still snaked around our ankles, dragged like heavy hems..."

The two halves of Flesh-Coloured Dominoes are so strikingly dissimilar as to cause the metaphorical equivalent of whiplash. One half is an irreverent, bawdy romp reminiscent of Rabelais that began rich in humor and word play but failed to evolve satisfactorily. This lack of development rendered the Baroness's narrative repetitive and the meandering quality became tiresome. Perhaps this was meant to convey the general lassitude of her social class during that time period. If so then I now understand the impetus for the French Revolution on a visceral level. Meanwhile the other half of this novel is a deeply affecting, thought-provoking, melancholy meditation on the nature of identity, both personal and national, that I thoroughly enjoyed. For example, this is a conversation between our narrator as a boy and his grandfather when German Latvians began returning to Germany before World War II (even this sentence is difficult to construct):


"Is nationality determined by what's in your blood?"
The question must have been surprising, because Grandfather picked up his magnifying glass again and peered at me through it.
"Empress Catherine II, Princess of Anhalt-Zerbst, didn't see Russia once before she turned fifteen. Does that mean that she's not the empress of Russia? Is Hitler not German because Austrian blood, or blood from who knows what other countries, flows through his veins? Around the year 900 the Viking Rollo founded Normandy in northern France. He had a son out of wedlock with some French tanner's daughter; the son became England's William the Conqueror..."
"Then is the concept of nationality non-existent?"
"No, of course not. It's just not one easily explained. The grouping of people into nationalities is a phenomenon in itself...There are often centres of power that crop up in the world that collect and pump up the lesser powers. Until the moment when the totality starts to break up and separate. Connections create devastating tensions."

Indeed. I am left to ponder the possibility that these forcible distinctions will mean the extinction of us all.
Posted by Texas Book Lover at 7:00 AM