The Death and Life of American Labor 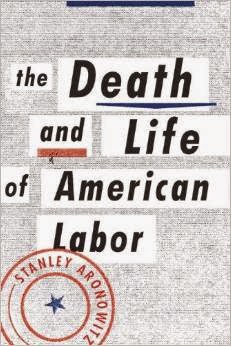 Okay people, I’m about to make some of you very uncomfortable. It is past time to sacrifice some sacred cows around here. In the land of bootstraps and Horatio Alger all you have to do to persuade great numbers of people to vote against their own self-interests is to wave a flag at them and say, “God.” Horatio Alger is a rare phenomenon, an anecdote and a poor substitute for public policy and the bootstraps have gone missing – new models of footwear don’t come with that feature. Please empty your heads of preconceived notions to the extent possible (no knee-jerk reactions to the name “Marx”) and don your thinking caps.

What if capitalism in the form currently practiced in the United States is no longer tenable? What if declining union membership and influence are not simply a concept whose time has passed but rather are the result of unions having been co-opted by the very laws that were supposed to be the answer to labor disputes? What if the National Labor Relations Act (NLRA) and the National Labor Relations Board (NLRB) precipitated an identity crisis by effectively transforming formerly radical unions into establishment collaborators? What if collectives are the answer to economic malaise, social challenges and environmental degradation? Are we witnessing nothing less than the death of Rousseau‘s social contract?

rad·i·cal: radək(ə)l/ adjective 1. (especially of change or action) relating to or affecting the fundamental nature of something; far-reaching or thorough.

In The Death and Life of American Labor: Towards a New Workers’ Movement, Stanley Aronowitz, author of more than two dozen books and Distinguished Professor of Sociology and Urban Education at the Graduate Center of the City University of New York, seeks to answer these questions and provide a prescription for reviving the labor movement. Aronowitz believes that we suffer from a pathological failure of imagination and the fallacious assumption that the resolution of labor v. capital disputes (or any dispute, for that matter) must be a zero sum game. It does not have to be winner-take-all; we can all take some. We must learn to say “both, and” instead of “either, or.”


Aronowitz accuses unions of relying on electoral politics instead of direct local action to achieve their goals, all but abandoning organizing and having ignored entirely great numbers of professional workers, administrative workers and an ever-increasing group he christens the “precariat,” e.g., temporary, part-time and seasonal workers. He theorizes that holding a NLRB-supervised election is not the best strategy for a strong union and that “collective bargaining has become collective begging.” He believes we need to resurrect minority unions and return to shop steward positions filled by the men and women actually working in the shop, not lawyers and professional grievance handlers. Aronowitz posits that a contract should not be the goal of labor-management negotiations because it locks in the terms for as many as six years and removes the possibility of a legal strike or other action which are the unions’ most effective tactics. Penalties for violating a contract involve large fines and even imprisonment. How often does management go to prison for violating anything? But I digress.

You won’t read American Labor for entertainment – it is not light reading before bed. You will read American Labor for your education and for the fresh treatment of old ideas. I connected with it most strongly when Aronowitz discussed the larger contexts of politics and the social consequences of various economic practices. It can be a little dry in the straight history sections (although sometimes he quotes Rainer Maria Fassbinder) – lots of facts and figures. But the history of the labor movement is important and we need to know it. We need to remember that people died for the concessions we have now. And make no mistake that they ARE concessions – management did not grant basic benefits from on high out of the largess of its tender heart. We have dead people to thank for the eight-hour day, weekends, workers’ compensation, workplace safety, unemployment insurance and the prohibition on child labor.

Fassbinder was right: fear will eat your soul.
Posted by Texas Book Lover at 7:00 AM