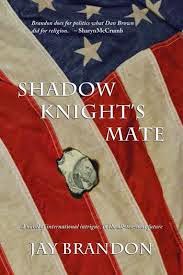 Just because you’re paranoid doesn’t mean they aren’t out to get you.

I am a Jay Brandon fan from way back – I will not tell you from how far back. Brandon wrote some very engaging legal thrillers set in Texas that I thoroughly enjoyed. Shadow Knight’s Mate is nothing like those books except that it is engaging and I really enjoyed it. Shadow Knight’s Mate is some sort of weird amalgam of a super hero comic, sci-fi adventure, James Bond spy thriller, and Tom Clancy techno suspense nightmare that contemplates a post-America world. With a little Dean Koontz thrown in just to keep things interesting.

The Circle is a shadowy American organization that basically runs the planet – possibly the known universe. Possibly several unknown parallel universes. Imagine a super-secret philanthropic conspiracy wielding unlimited power whose mission is to maintain America’s influence in the world. Think Opus Dei, the Knights Templar, the Tri-lateral Commission, and that annual meeting that Dick Cheney always goes to that I can’t remember the name of. But with the best of intentions – like the X-Men or the Justice League.

After a terrorist attack in the United States, Circle member Jack Driscoll must save the world from an ingenious and infernal plot hatched by a madman whose physical description reminds me of the villain in Austin Powers. In a mad dash around the planet from France to Malaysia to the Czech Republic and Germany and Israel and back again, Jack must wrangle with forces of evil determined to bring the United States to its knees. And several doppelgangers who’ve been gallivanting around Europe, up to no good, impersonating him. You see, Jack is the one person the mastermind behind the plot fears could stop him.

Shadow Knight’s Mate is not my usual thing; I’m not big on genre fiction most of the time. The quality of this story is uneven and it suffers from awkward action scenes that don’t flow well, although the latter improves about two-thirds of the way through the text. There is no nuanced character development, no lyrical use of language, spot-on metaphor or evocative description. What this book has in spades is plot, expert pacing, and plenty of humor. It was so much fun. It kept me turning the pages because I truly wanted answers to so many questions.

Two things: 1) Never underestimate the grudges formed in childhood; and 2) a National Security Adviser with an inferiority complex AND delusions of grandeur should be avoided. Don’t think too hard about it – just give in and go where the story takes you. You’ll be glad you did.
Posted by Texas Book Lover at 7:00 AM