Review: The Festival of Bones 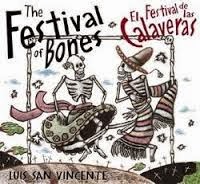 The Festival of Bones, written and illustrated by Luis San Vicente, is The Little-Bitty Book for the Day of the Dead, a bilingual early reader, translated from the Spanish by John William Byrd and Bobby Byrd of Cinco Puntos Press. Luis San Vicente is a Mexico City artist whose work has been exhibited in Mexico, Venezuela, Europe and the United States. He is a winner of UNESCO's NOMA Encouragement Concours Prize for Illustration.

Originally published in Mexico in 1999, Festival is a poem, song, cookbook, history and craft how-to all rolled into one enchanting package. An ancient Aztec tradition that has been incorporated over hundreds of years into the Catholic tradition, El Día de los Muertos is a holiday celebrated in Mexico from October 31st through November 2nd. It is a joyful time when family and friends gather together to remember the dead.

They're coming and they're going


And you see them passing by.


They're dancing over here,


They're chatting over there...
It's their day


And they're going to have a good time.

The illustrations in Festival, in Mexican folk-art style, depict a happy celebration of the lives of the dead as they make their way to the graveyard, singing and dancing, rollerskating and riding bicycles. 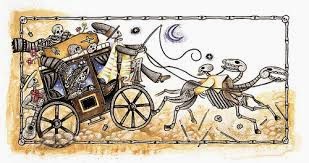 Included in the text is a simple history of the holiday and ideas for your own celebration, including suggestions for building an altar and recipes for pan de muerto (a sweet bread) and sugar skull candies. Festival is a charming book that would be a great addition to every little Texan's library.
Posted by Texas Book Lover at 7:00 AM