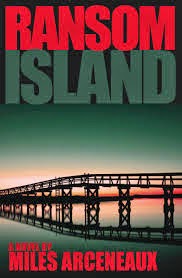 Ransom Island is the third offering by Miles Arceneaux (Miles Arceneaux is actually three people: James R. Dennis, Brent Douglass and John T. Davis.) in a genre christened Gulf Coast Noir. This is the tale of the Sweetwater brothers of Ransom Island, Texas and what happens when the Galveston mob, one desperate woman, the Klan and Duke Ellington converge on the island during the hot, muggy summer of 1953. You heard me – it’s quite a combo, no? Rupert Sweetwater and his brothers, Flavius (their mother was taking a community college class in Western literature when he was born) and Noble, own and operate the Shady Palm Fish Camp where you can rent a cabin and stay awhile or a small boat for fishing, cool off with a cold beer in the bar and grill or take a spin across the floor in the dance hall.

The action begins when Jimmy Glick, an enforcer for the Ginestra crime family in Galveston, arrives in Aransas Pass on assignment, following the trail of Sally Rose, Primo Ginestra’s daughter, who has flown the coop. Sally Rose knows what her father is and wishes never to see him again. She’s dropped out of college and moved from place to place, working as a waitress and managing to stay one step ahead of Glick. Until now. “Sally Rose wasn’t at the end of her rope, exactly, but there wasn’t enough line left to tie a decent square knot.”

Sally Rose arrives on Ransom Island as a stow-away in the back of a refrigerated beer truck. She takes a job at Shady’s and keeps her secrets to herself. When Glick and friends find her they decide that Ransom Island looks like just the place to open a new franchise of vice and proceed to make the Sweetwater brothers an offer they can’t refuse. Except that they do and the plan they hatch to save Shady’s and Ransom Island is pure genius.

Arceneaux reminds me powerfully of James Lee Burke in his talent for visceral evocation of a very particular historical period and place. I was often laughing aloud - he excels at wry humor. For example:


“A band on the road was something between a herd of jive-talking gypsies and a troop of reefer-smoking Foreign Legionnaires.”

Arceneaux is the King of Opening Paragraphs; skillfully dangling a combination of quirky incongruity and foreboding that compels you to find out what the hell he’s talking about - the literary equivalent of a double-take. For example:


“Bob Sweeney, the head salesman and self-described kick-ass stemwinder of the only men’s haberdashery in Rockport, was minding his own business when a man with one shoe walked in.”


“Old Hitler’s body washed up on Ransom Island one June morning in 1953, a feathered red-cane lance buried deep in his back. Some insisted it was fate, while others shook their heads and said it was a crying shame. Later on, when all the excitement died down, most everyone agreed it had been a portent of things to come.”


Incidentally, Ransom Island also contains the entire campaign strategy of the Texas Republican Party, then AND now, and the best and most succinct definition of the KKK I’ve ever come across: “… they were mostly white trash who preyed on those lower on the social food chain to distract themselves from their own ignorance and poverty.” Ta-daa!

I thoroughly enjoyed Ransom Island; it is an easy-reading, fast and rollicking ride. The only flat note in this composition is a subplot involving Rupert Sweetwater and his wife, Darla, which I found unnecessary – I wanted to bat her away like a fly. Otherwise there is everything to like here and Texans will especially enjoy Ransom Island because they will recognize these places and these characters. We all know the folks inhabiting this small barrier island in the Gulf of Mexico and Arceneaux conjures them with affection and without caricature.
Posted by Texas Book Lover at 7:00 AM