I Shall Be Near To You 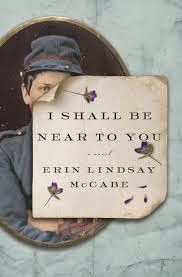 In I Shall Be Near To You Erin Lindsay McCabe has created a rare thing in this day and age: an unabashed romance, an unironic love story. Of course, she had to go back to the nineteenth century to do so. Our heroine, Rosetta, is spirited and unconventional, a woman ahead of her time, for the most part. A tomboy who preferred harvesting in the fields to sewing in the house, Rosetta refuses to let the social and gender restrictions of the time dictate her behavior.

Rosetta and Jeremiah have imagined a future on a farm of their own in Nebraska Territory. In order to obtain the needed funds, Jeremiah plans to volunteer for the Union Army. Everyone is convinced that the Civil War won’t last long and he can come home in no time with the money and they can begin the rest of their lives together.

All the Union needs is one good General and one good win. Then this war will be over and we’ll have our country back and be home to our kin before harvest time.

Rosetta and Jeremiah are married in upstate New York in January, 1862, and a couple of weeks later Jeremiah and a handful of local boys march off to join the war effort. Rosetta is heartsick without him. When she is attacked by another man fear and desperation drive her to cut her hair, bind her breasts, hem some of her husband’s clothes and set out to follow him. She joins the 97th New York Volunteers as Private Ross Stone, which is a joke between her and Jeremiah; he has often told her that her head is as hard as stone. It soon becomes clear that this war will not be over soon, that they will see plenty of combat and not everyone will make it out alive. I cannot say much more about the plot or there will be spoilers all over the place.

As it turns out, many women impersonated men to join the army during the Civil War, most of them following husbands, fathers or brothers. The research that must have gone into this book is tremendous and Ms. McCabe should be commended for her diligence. Someone should hand over a doctorate in American history, actually. The period details of speech, clothing, and technology, among other things, are meticulous. McCabe describes the process of firing a musket, “load charge ram prime aim fire,” and I am amazed that anyone anywhere ever actually managed to fire a weapon, let alone actually hit something.

The juxtaposition between the boasting and tough talk at the encampments and the reality of broken bodies and minds in the field hospitals is stark and heartbreaking. Overheard by Rosetta at one of the hospitals:

“I was a fool to have such an itch to fight,” Bed Twenty-six says. “It ain’t how I thought, having Rebel artillerymen laying their shells down in front of us. Canister. It tears right through the lines, cuts down whole Companies of men. And if it don’t get you, you got to keep moving forward into it. That’s bad enough. But at Shiloh the trees caught fire. … It was a sight to see. Like a halo over every tree, the way the leaves caught first. Except then the branches started falling.” Bed Twenty-six takes a deep breath and closes his eyes. “You ever heard a hog at slaughter?”

McCabe has a gift for metaphor and a talent for a particularly affecting turn of phrase. This is Rosetta holding her baby sister for the first time:

I held her, thinking of the time I broke Mama’s special china teacup and feeling scared what would happen if I dropped this, the only sister I’ve ever had, if it would be like that baby bird all skin and dark lids and what happened when it fell out of its nest. I couldn’t get to Mama’s bed fast or slow enough…

And this is Rosetta on the anticipation of battle:

Our bugles sound and voices roar as we march past the stone house and up a steep hill. Our blue Company flag waves ahead of the officers on their horses and the drums roll and my feet move without me even willing them. The air around us is tight like before lightning, and I think of Mama’s pregnant belly stretched out taut.

I am reminded of Charles Frazier’s Cold Mountain and that is a fine thing indeed.