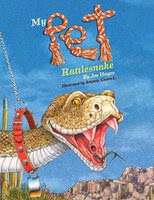 My Pet Rattlesnake by Joe Hayes continues the American tradition of tall tales. Our nameless protagonist is a boy who loves the desert. He's out exploring one day when he discovers a rattlesnake trapped by a rock slide. The snake is so grateful when our hero rescues him that he follows the boy home.

The rattlesnake makes a good pet: he goes for walks; shares the boy's bed, nipping playfully at his toes; he even scares off burglars. But alas, all of this makes the neighbors nervous so the boy's father makes him return his pet to the desert. The next morning the snake is back, a la Homeward Bound. This is a cute story but I'm not sure it has the intended impact in print - the end begs to be told aloud. Storytelling makes it a worthy addition to our collection of tall tales. 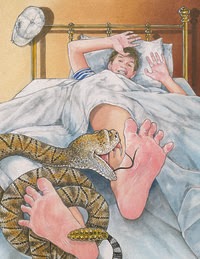 The best part of My Pet Rattlesnake is the illustrations. Antonio Castro L.'s gorgeous drawings of the sun-washed desert and hilarious, emotive face of the rattlesnake are highly-detailed and somehow sweet. In 2005, the government of the State of Chihuahua, Mexico, commissioned Antonio to paint a mural for the government palace and his work has been exhibited in galleries and museums in Texas, Mexico City, Oaxaca, Spain, and Italy.

Joe Hayes is the resident storyteller at the Wheelwright Museum of the American Indian in Santa Fe, New Mexico. He has told stories at the National Storytelling Festival and is featured in Best Loved Stories Told at the National Storytelling Festival. His books have received many awards, including the Arizona Young Readers Award, two Land of Enchantment Children’s Book Awards, four IPPY Awards, a Southwest Book Award, an Aesop Accolade Award, and a Texas Bluebonnet Award. Most recently, Kirkus Reviews named Don't Say A Word, Mama one of the best books of 2013.
Posted by Texas Book Lover at 7:00 AM