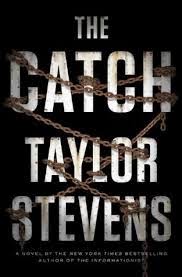 Vanessa Michael Munroe is back in The Catch, Taylor Stevens’ fourth novel. I have reviewed this series for Crown Publishers since its debut and The Catch is worthy of its predecessors. After the overwhelming events of The Doll, Munroe has fled to the relative quiet of a backwater in Djibouti, signing on as a linguist and fixer for a maritime security team (read “mercenaries”). You know – tasks she can perform with her eyes closed and one hand tied behind her back. Of course, this vacation doesn’t last long.

Munroe discovers that the ship for which they are providing security is transporting more than rice as the captain deliberately diverges from their course and into Somali waters. Pirates turn out not to be the only problem, just the most immediate. Curiously, the pirates are apparently under orders not to harm the captain and this appears to be no random hijacking. What do they want with the captain? And what will happen when Munroe escapes to Mombasa with the captain in tow?

Once Munroe arrives back in civilization, such as it is, and delivers the unconscious captain to a hospital, she is free to leave this debacle behind her. Right? Free to go home or to Timbuktu (which is closer). But if you’ve read the first three books then you know that Munroe’s finely honed sense of justice won’t allow her to leave that ship out there, her team and the crew hostage. The plan to save the day is complicated and intricate and a thing of beauty.

The Catch has a slower pace than The Doll, the third volume in the series. Nothing happens quickly in the somnolence of equatorial Africa and that includes the climax of this tale which takes up eight chapters – almost sixty pages. I believe I described The Doll as beginning like a thoroughbred out of the gate at Aqueduct. This one is more like a big cat stalking you – a twig snapping in the jungle, a slightly darker shadow in your peripheral vision. Stevens tunes the tension, winding you tighter and tighter, until you think something just might snap. Munroe is, as ever, a unique character in the suspense/thriller genre. USA Today compared her to Ludlum’s Jason Bourne and I would have to agree wholeheartedly. Now that’s a thought: Munroe v Bourne. I don’t know who I’d put my money on.
Posted by Texas Book Lover at 7:00 AM