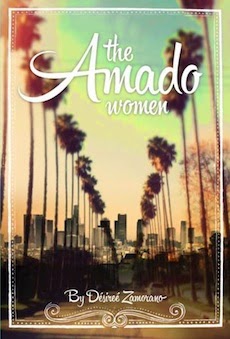 So this is what I thought that night...I thought, I will not sleep through my life. I am going to live it awake. - Mercy Amado

One of the remarkable things about The Amado Women by Désireé Zamorano is that it is indistinguished. No no no, hold on – allow me to explain. From the above cast descriptions you cannot know the ethnic backgrounds of these women. Their backgrounds could be Italian, Albanian, Egyptian, Welsh. It strikes me as ridiculous in the year 2014 to feel the need to say this: These ladies are Latinas and yet not one lives in the barrio; there are no maids, no chicken-plucking line workers, no yardmen, no halting English or standing around in parks or on street corners waiting for work. They are vibrant women living in California in the twenty-first century – suburbia, Silicon Valley, metropolitan Los Angeles. No one should have to point this out this late in the game: The Amado women are simply, and complexly, American. The lack of stereotypes frees them to just be human and that is such a relief, que no?

Our story begins with a mystery and a crime. Sylvia’s 10-year marriage is falling apart – no, actually it’s being ripped apart and stomped on. Her husband Jack is a successful attorney with all the trappings: McMansion, Ralph Lauren socks, inappropriate landscaping. But Sylvia has discovered that they’re practically broke. What has Jack done with all of their money? That’s the mystery. The crime is that Sylvia (and one of the children) is being stomped on, quite literally, by Jack. Sylvia collects all of the financial paperwork she can find, the clues to the mystery, and sends it to her sister Celeste, the investment manager. Celeste will be able to solve the mystery and track down the missing funds. Except that the brilliant, prudent, and skillful Celeste can’t – the money has disappeared without a trace. There’s no trail to follow and this is the worst clue of all because “…In Celeste’s business, missing money meant addiction: drugs, sex, gambling.”


The Amado Women is well-plotted and skillfully paced. Désireé  Zamorano is accomplished at creating atmosphere, especially the menace radiating from Jack. There’s a sexual assault scene between husband and wife that had me shrinking in my chair – the scene powerful enough to evoke self-preservation, instinctively making myself a smaller target. As talented as she is at atmospherics, Ms. Zamorano’s triumph is her characters and her portrayal of the individual histories that converge to form tangled family relationships. In the face of tragedy and the turmoil of the aftermath, these four very different women must come together to form a united whole. Can they do it? This will require forgiveness from each to the other but first, and possibly more difficult, they will have to forgive themselves.

Désireé Zamorano is a playwright, Pushcart Prize nominee for fiction, and the director of the Community Literacy Center at Occidental College. She also collaborates with InsideOut Writers, a program that works with formerly incarcerated youth.
Posted by Texas Book Lover at 5:46 PM