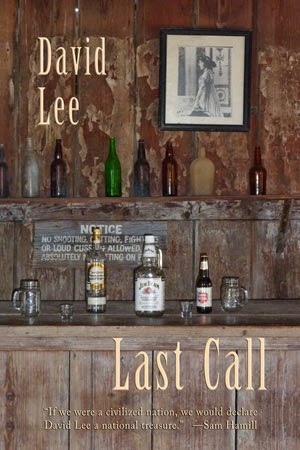 I have a new Poetrypalooza favorite and a new aspiration in life - for someone to love me this much. Last Call by David Lee is a celebration of, and ode to, his friend the late William Kloefkorn, Poet Laureate of Nebraska. These poems chronicle the lives of a rural West Texas community and the many ways in which the characters of this small town are braided together. Especially one Billy Klogphorne and one Clovis Ledbitter, whom I suspect I ran across many years ago at the now-defunct Cattleman's Restaurant outside Colorado City, Texas. I know these people, I know this place.

Watching the recurring characters develop is a joy. There are many monologues that had me truly laughing out loud. For example, this is the title of one of the poems: "Substitute Teacher or The morning Billy Klogphorne taught the adolescent male Sunday School class lesson on the designated Christian Leader Preparation outline topic of Genesis 5:18, 19 and 23, 24, proving Lamech and polygamy were of the lineage of Cain and therefore accursed of God and Why he was never invited back to teach Sunday School again." Yep. Lee has an astonishing gift for colloquial speech that borders on a sort of onomatopoeia, if that makes any sense. I suspect those of you who know his work will understand what I'm trying to say. There is a prodigious and kindly intelligence at work and play here. I cannot recommend this volume highly enough.

¡Contempla!
-Juan Bautista, who, folk legend tells us,
lost his mind over a woman's footprints
in the dust somewhere east of Pecos

Onella Penny smoked a pipe
P.A. tobacco you could smell
two yards over
nobody every mentioned
outside our neighborhood
but what finally made her famous
after the big stomp
was when we noticed
how she walked so hard
for a woman who wasn't
to speak of necessarily
fleshy

in a dry season
her steps wove dust
cyclone children on the way
to the trash barrel or clothes line
past her ankles, swirls
almost to her knees
so that

footstep whirlwinds
all around her back yard, in immaculate Texanese
Clovis said One them air dust devils
gets under her housecoat
up her nightgown arising
she'll lift herself
like a full grown female angel
right off the ground
I bet

When Cephas Bilberry heard
at the Dew Drop Inn that night
he said Well I hope Marvin he learnt
a lesson from it either way
whatever it was needing
such immediate education
Billy said I imagine he did
Cephas said That being what?
Billy said Next time
he gets knocked on his ass
he'll make sure he falls down
so the following foot marks
don't show

Cephas
said You mean
whoever did that stomp
it was after he'd already been knocked down?
Clovis said
Unless she can walk around in the air
stomping on heads, you know
a better way?

Cephas
said Well that might be right
Clovis said Yep
ever footstep in this drought
raises a genuine cyclome or leaves a print
sometimes permanent
and that's not blowing smoke
or preacher talk
and Cephas said Godamitey's mama
aint it the truth?

when he
opened his door he said
You aint posta be here today yet
it aint Monday is it?
she screamed and pressed her hands to her cheeks
the inbdelible print of a foot
clearly visible on Marvin Penny's face
¡Madre de dios! she screamed
he said What the hell?
but Isabel Ramones turned and ran
down the calle shouting
¡Es un Milagro! ¡Un Milagro!

David Lee was raised in West Texas, my home. He is the author of twenty books of poetry, the first Poet Laureate of Utah, and recently retired as the Chairman of the Department of Language and Literature at Southern Utah University. His many awards include the Mountain & Plains Booksellers Award in Poetry, the Western States Book Award in Poetry, and the Utah Governor's Award for lifetime achievement.
Posted by Texas Book Lover at 9:41 PM