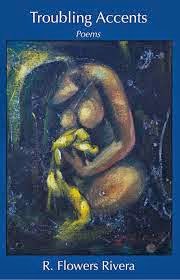 The beautiful, haunted South is ever-present in Troubling Accents by R. Flowers Rivera. It is both an infection and the re-bar in the spines of its native children. The genteel surface is onionskin-thin. Spend any time in the South, paying the least bit of attention, and you sense the threat of violence, always. It seems to live in the air and the soil and the water. The South will make you believe in instinct.

I'd think about what they tell children, about kissing your elbow, and I tried to. I actually did. I was that scared... - William Faulkner, from Sanctuary

Leave it to a Southerner to puncture the ordinary,
transmuting violence and my hatred for certain tones
into something brutal and beautiful and vulgar like pie-head,
saturnine boys knifing belt notches for lays,

to have some white man suggest I go slow,
no matter that the air is too humid to sustain
cicadas and serried, clapboard houses
along with my desperate need to question.

What few answers I found only led to more compunction,
making a slattern, purple-mouthed woman
seem almost justified for wanting to kiss her elbow
as she lay among the chaff, desperate to slip the yoke

of Fate. I ran from that land to hide in the New South.
There, there are manners like moribund magnolias.
Effluvium still seeps from every flowery syllable I breathe.
I cannot dissemble whence I come.

Now, not quite an expatriate, I have found a place
inside myself where I can be comfortably nostalgic,
my ears alert for yalls and nems and all those
troubling accents of home.

Nip and tuck
that woebegone lip
as the pink flesh falls
slack
fueling the machine
of song.

Lexicon of soul
lay it all down
make them know
what it feels like
to be
sprung.
Once they're rapt
in your stirrin'
be still
don't say
a mumbling word.

Gut-wrenching
rage
has no place
in such an earnest smile
but amidst your own
kind
there's always a market for
a mean woman.

R. Flowers Rivera is a child of Mississippi. Her work has been published in numerous journals and anthologies, including African American Review, The Southern Review, and Mischief. Twice nominated for the Pushcart Prize, among others, she was awarded the 1999 Peregrine Prize and the Leo Love Merit Scholarship in Poetry.
Posted by Texas Book Lover at 10:55 PM